New Delhi: Bollywood star Alia Bhatt, who is currently prepping for her role in her and Shah Rukh Khan’s home production film ‘Darlings’, on Monday, shared a glimpse of the upcoming movie’s script with fans.

The ‘Kapoor and Sons’ actor took to her Instagram handle and shared a story that featured the first page of the movie’s script. Along with the photo she wrote, “My Date Today,” followed by a heart emoji. 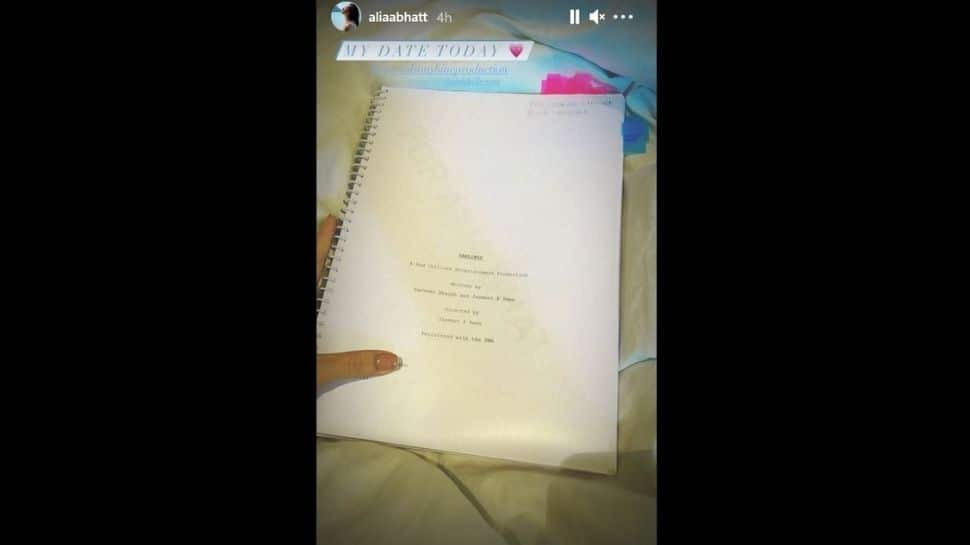 ‘Darlings’ is a unique story of a quirky mother-daughter duo navigating through crazy circumstances as they try to find their place in the world.

The dark comedy is set in Mumbai against the backdrop of a conservative lower-middle-class neighbourhood and traces the lives of these two women as they find courage and love in exceptional circumstances.

This project marks a first for many, the directorial debut of Jasmeet K Reen with a feature film and Alia’s first as she turns producer with Eternal Sunshine Productions. The film will also be co-produced by Shah Rukh’s Red Chillies Entertainment.

Earlier in March, Alia had announced her production debut with ‘Darlings’. In her post, she wrote “This one’s special! Announcing #Darlings, my first ever production under Eternal Sunshine Productions, in association with my fav Shah Rukh Khan’s Red Chillies Entertainment.”

Other than ‘Darlings’, the 28-year-old actor has a lot of projects in her kitty. She will be seen in ‘Gangubai Khatiawadi’ helmed by Sanjay Leela Bhansali, ‘RRR’ with Ram Charan and Jr. NTR and ‘Brahmastra’ with Ranbir Kapoor and Amitabh Bachchan.

Apart from the film projects, Alia has also been actively working on humanitarian grounds. She had earlier collaborated with renowned journalist Faye D’Souza to share relevant information about COVID-19 resources on social media.