New Delhi: As the ever-gorgeous Bollywood star Kareena Kapoor Khan turned 41 on Tuesday, several of her family members and fellow celebrities from the film fraternity, poured in birthday wishes for her.

Kangana Ranaut, who has been making headlines for her controversial statements other than her brilliant acting skills, also wished the Bollywood diva on her special day. Kangana extended her birthday wishes by sharing a collage featuring different looks of Kareena. She wrote, “Happy Birthday to the most gorgeous of them all.” Interestingly, Kareena shared Kangana’s Instagram wish as her story.

The development comes after Kareena Kapoor lost the much-anticipated project ‘The Incarnation: Sita’ to Kangana. Though, there is no confirmation on the reason why the makers opted for Kangana as the final choice for the role, it was reported that the ‘Heroine’ actress demanded a whopping fee for her, that led to her ouster from the project. 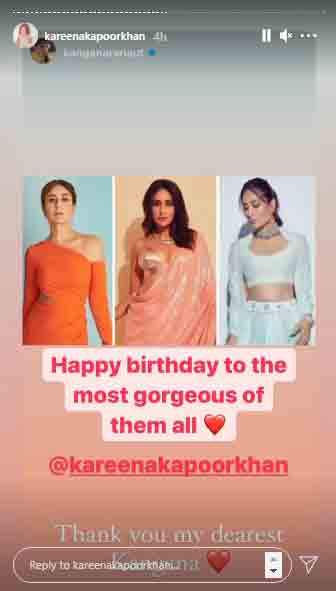 On the work front, Kareena will be seen in the highly anticipated film ‘Laal Singh Chaddha’. The movie also stars Aamir Khan with whom Kareena had last shared screen space in the film ‘3 Idiots’.

The film went on the floor last year and was shot across 100 locations in the country. It is currently scheduled to release this Christmas.