In 2014, then Gujarat Chief Minister Narendra Modi stormed to national prominence on the promise of bringing about Vikas (economic growth) and Achhe Din (better days). He came in at a time when India’s economy appeared to have lost its way in terms of GDP growth even as retail inflation (price rise) was soaring and private investments were getting stalled.

Regardless of how the economy performed during the first five-year term, Modi repeated his success in 2019 by returning as Prime Minister with an even bigger mandate.

Last week, India completed seven years under his leadership. It is important to note that he is the first and only Indian PM who has enjoyed the comfort of a single-party majority in the Indian Parliament since the start of economic reforms in 1991. The lack of such a majority was often cited as the main reason for India failing to achieve its potential as an economic powerhouse.

Between PM Modi’s promises and his political mandates, it was expected that over the medium term — the period of seven years is closer to the medium term than the short term — India would be distinctly better off in terms of its economic performance.

Perhaps the best way to arrive at such a conclusion is to look at the so-called “fundamentals of the economy”. This phrase essentially refers to a bunch of economy-wide variables that provide the most robust measure of an economy’s health. That is why, during periods of economic upheavals, you often hear political leaders reassure the public that the “fundamentals of the economy are sound”.

Such variables include measures such as gross domestic product, unemployment rate, inflation rate, fiscal deficit of the government (a proxy for the health of government finances), savings and investment rates in the economy, the domestic currency’s relative value against the US dollar, the balance of payment, the level of poverty and inequality etc.

Let’s look at the most important ones.

Gross Domestic Product: Contrary to perception advanced by the Union government, the GDP growth rate has been a point of growing weakness for the last five of the past seven years.

Look at the below chart provided in the Reserve Bank of India or RBI’s Annual Report for FY21 released on May 27. The Chart maps the turning points in India’s growth story. The Chart maps the turning points in India’s growth story.

After the decline in the wake of the Global Financial Crisis, the Indian economy started its recovery in March 2013 — more than a year before the Modi government took charge.

But more importantly, this recovery turned into a secular deceleration of growth since the third quarter (October to December) of 2016-17. While RBI does not state it, the Modi government’s decision to demonetise 86% of India’s currency overnight on November 8 is seen by many experts as the trigger that set India’s growth into a downward spiral.

As the ripples of demonetisation and a poorly-designed and hastily-implemented Good and Services Tax (GST) spread through an economy that was already struggling with massive bad loans in the banking system, the GDP growth rate steadily fell from over 8% in FY17 to about 4% in FY20, just before Covid-19 hit.

But as analysis showed — before Covid’s was even declared a global pandemic — the fundamentals of the Indian economy were already quite weak.

Overall, if one looks at the recent past (see the chart below), India’s GDP growth pattern resembled an “inverted V” even before Covid-19 hit the economy. 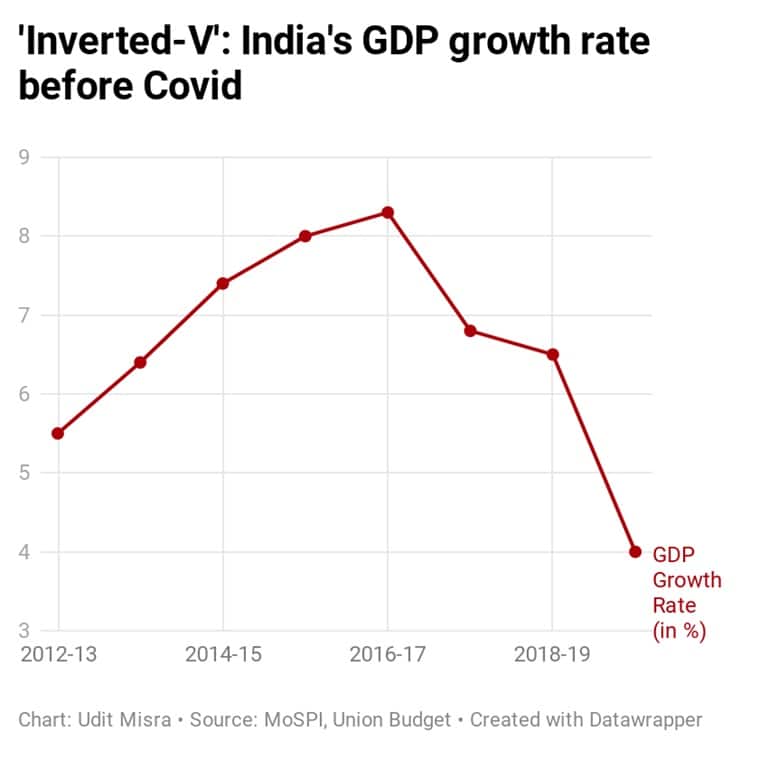 On Monday evening, the Ministry of Statistics and Programme Implementation (MoSPI) will release its latest assessment of the GDP growth in FY21 (2020-21) — the year which saw the Covid-19 impact. You can read ExplainSpeaking’s analysis about the GDP of FY21 in the Explained section of IndianExpress.com on Tuesday (June 1).

GDP per capita: Often, it helps to look at GDP per capita, which is total GDP divided by the total population, to better understand how well placed an average person is in an economy. But here, too, India has been losing out. A case in point is Bangladesh.

Unemployment rate: This is another fundamental factor. Here the news is possibly the worst of all. First came the news that India’s unemployment rate, even according to the government’s own surveys, was at a 45-year high in 2017-18 — the year after demonetisation and the one which saw the introduction of GST. Then in 2019 came the news that between 2012 and 2018, the total number of employed people fell by 9 million — the first such instance of total employment declining in independent India’s history.

As against the norm of 2%-3% unemployment rate, India started routinely witnessing unemployment rates close to 6%-7% in the years leading up to Covid-19. The pandemic, of course, made matters considerably worse.

With weak growth prospects, unemployment is likely to be the biggest headache for PM Modi in the remainder of his current term.

But since the last quarter of 2019, India has been facing high and persistent retail inflation. Even the demand destruction due to Covid lockdowns could not extinguish the inflationary surge. India was one of few countries — among comparable advanced and emerging market economies — that has witnessed inflation trending consistently above or near the RBI’s threshold since later 2019.

Going forward, inflation is a big worry for India. It is for this reason that the RBI is expected to hold the rates in its upcoming credit policy review on June 4. A worker unloads sacks of grain at a store in Chandni Chowk market in New Delhi.

Fiscal deficit: The fiscal deficit is essentially a marker of the health of government finances and tracks the amount of money that a government has to borrow from the market to meet its expenses.

Typically there are two downsides of excessive borrowing. One, government borrowings reduce the investible funds available for the private businesses to borrow (this is called “crowding out the private sector”); this also drives up the price (interest rate) for such loans.

Two, additional borrowings increase the overall debt that the government has to repay. Higher debt levels imply a higher proportion of government taxes going to pay back past loans. For the same reason, they also imply a higher level of taxes.

Rupee vs Dollar: The exchange rate of the domestic currency with the US dollar is a robust metric to capture the relative strength of the economy. A US dollar was worth Rs 59 when Modi took over as the PM. Seven years later, it is closer to Rs 73. The relative weakness of the rupee reflects the reduced purchasing power of the Indian currency.

These were some, not all, of the metrics that often qualify as the fundamentals of an economy.

On a related note, looking at the poor state of the economy, Uday Kotak, CII president and MD of Kotak Mahindra Bank urged the government to expand its balance sheets — print money — and spend.

The idea is simple. Under the circumstances, people are holding back from spending money. Partly this has to do with job losses and reduced incomes and partly due to the worry about future healthcare expenses.

But private consumer demand is the biggest engine of GDP growth — it accounts for roughly 55% of all demand. It was already faltering right through 2019 (before Covid hit). Its collapse post-Covid implies that businesses have no reason to invest — their existing capacities are not being utilised fully. There is a real danger that business profitability will struggle in the years to come because of weak demand.

But, if the government was to print money and spend it on the poor and the needy, this deepening crisis can be averted. Should the government print money? If yes, then why didn’t it do so already? What is the downside of printing money? To understand this issue, read this explainer which was written at the same time last year when similar demands were being made.

The main argument against printing money is not so much about its initiation as it is about its end.

It is true that by printing money, the government can boost overall demand at a time when private demand has fallen — as it has today.

But there is a political risk. What if the politicians in power do not stop printing soon enough? If that happens then this tool will sow the seeds for another crisis.

Here’s how: Government expenditure using this new money boosts incomes and raises private demand in the economy. Thus, it fuels inflation. A little increase in inflation is healthy as it encourages business activity. But if the government doesn’t stop in time, more and more money floods the market and creates high inflation.

And here’s the salient bit: Since inflation is revealed with a lag, it is often too late before governments realise they have over-borrowed. Higher inflation and higher government debt provide grounds for macroeconomic instability.

But this demand by the Indian business class also begs the question: Why similar calls in the past were berated as “politics of dole”?

Yes, Covid is an extraordinarily tough time but even when India grows at 6%-7%, millions live in abject poverty. It is worth asking why the same policy suggestion is politics of dole at one point and economics of wisdom at another.

Write to me with your queries and suggestions at udit.misr[email protected]