PATNA: Bihar BJP president Sanjay Jaiswal has severely criticised Baba Ramdev for his recent tirade against the allopathic system of medicine and dubbed the famed Yoga teacher as one who had popularized the ancient discipline like “Coco-Cola” but lacked the gravitas of a Yogi.

Sanjay Jaiswal, a multiple-term MP from Pashchim Champaran and a qualified medical practitioner himself, also urged the Indian Medical Association from steering clear of the spat, saying it was tantamount to frittering away of energies.

“Ramdev is a Yoga guru. Nobody can question his mastery of Yoga. But he is certainly not a Yogi. A Yogi is one who has all his senses and faculties firmly under control”, Jaiswal said in a Facebook post. 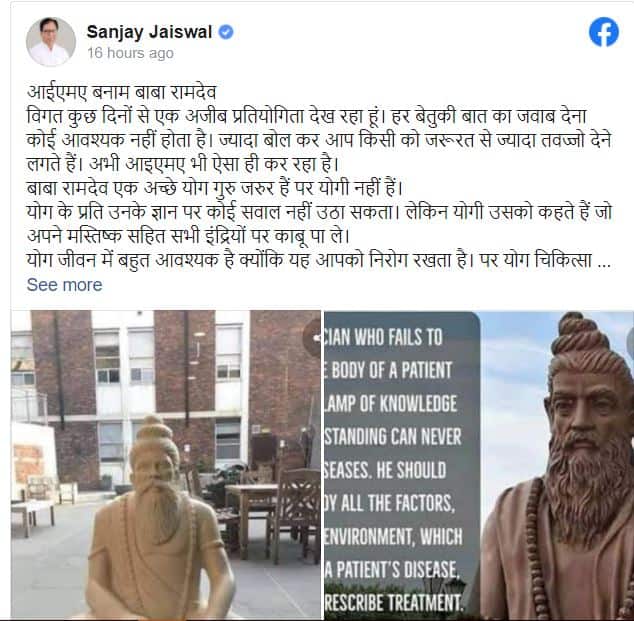 What he has done for Yoga is comparable to what Coco-Cola did for beverages. Indians have been, for ages, consuming ‘Shikanji and thandai’ but after the advent of the soft drink giant every home seems to be stocked with bottles of Pepsi and Coke”, Jaiswal remarked.

He, however, urged the IMA not to join the issue with the maverick Yoga guru and said “we must not fritter away our energies over trivia and concentrate on our noble profession. “It would be a disservice service to our innumerable colleagues who have lost their lives attending to their duties in the midst of the COVID 19 pandemic,” the BJL leader said.

Ramdev has been in the eye of a storm over a recently released video clip in which he questioned the efficacy of allopathic medicines in treating the dreaded coronavirus.

The Yoga guru also heads the Patanjali group which is the manufacturer of several products, Ayurvedic medicines and, had courted controversy following the launch, last year, of a concoction of herbs that supposedly builds immunity against COVID 19. The claim has met with disapproval from World Health Organization as well as the IMA.

Moreover, the Indian Medical Association has been up in arms against Ramdev over his recent diatribe and its Uttarkhand chapter has slapped the Yoga guru with a hefty defamation suit.

Jaiswal, however, also sought to underscore that Ayurveda, as a system of medicine, was widely respected. He shared a picture of the legendary Sushruta, called “the father of Indian surgery”, installed at the medical college affiliated to Melbourne University, and remarked that “I went to this world-renowned center of learning seven years ago.”

“In the symposium that I attended, I was asked questions that were about Ayurveda and not the stream in which I hold a post-graduate degree”.

He, however, asserted that every system of medicine “has its own limitations” which held true for Yoga, a sophisticated form of physiotherapy which can help us ward off illnesses but can create problems if we take to it to cure existing ailments”.