Can the business go the distance? That’s what you need to ask yourself when looking to invest today. Will the business be able to survive and thrive? Is the business cost-competitive? Are the revenue streams diversified enough? Can I trust the management? Add positive answers to these questions, and the last most important one: Is there still value? And you could have a winner on your hands.

Your chances of success from investing in resilient businesses of scale are higher today because a large number of mid-and-small sized players have been decimated. They won’t make the distance.

Covid has hurt businesses in ways that will leave only the cash-rich standing. Unfortunately, most mid and small size businesses don’t have easy access to capital. It is quite the opposite for large companies.

Companies have mopped up a record Rs 250,000 crore via Qualified Institutional Placements and Rights Issues in the past two years, according to Prime Database. That’s 1.4 times the funds raised in the preceding five years. 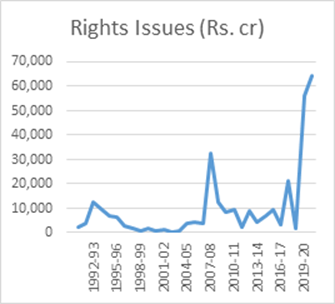 And this money has not even been put to work yet.

What could happen when it is? We took a look at the results of 196 non-finance companies—after excluding the three oil marketing majors (IOC, HPCL and BPCL) as well as Tata Steel, as their numbers skew the picture given their size—who have reported results for the last fiscal to glean more on the health of India Inc, and the picture isn’t concerning.

One significant revelation from the results data is that operating profits in the just-concluded fiscal (FY2021) have expanded despite a dip in sales by 3 percent year-on-year. 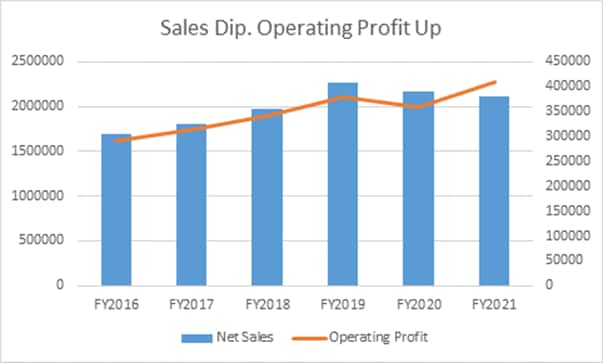 Can these be sustained? Maybe not at these levels, given some curtailed costs will make a comeback and higher commodity prices could hurt some (though they’ll benefit some others too). However, even if some of these gains are retained we’ll have moved to a higher trajectory than in the past years. 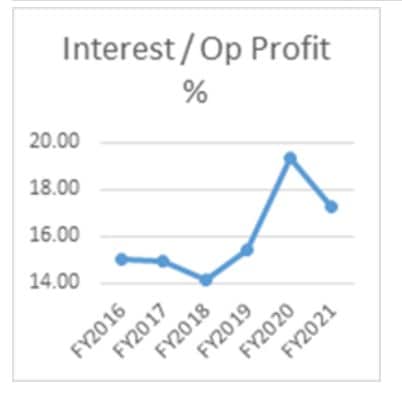 What’s more, interest costs that saw a significant leap in FY2020 have tempered. And given the moves to clip debt by many corporates in the last fiscal, a significant impact of lower financing costs likely lies ahead. This could offset some increase in operating costs going forward.

Interestingly here, while interest costs as a proportion of sales have not shown a decline, as sales have dipped when expressed in proportion to operating profits, the trend down has already started.

The big money raise in the past year has dented return on equity (ROE) for companies. But as this money starts being put to use, the ROE should start reverting to the mean, if not rise above it. Here it’s important to note that competition in several sectors will have significantly dwindled, and for leaders to expand their share of the pie will be easier—resulting in higher than economy tracking growth. Once capacity utilization hits a healthy level, the expansion will likely come faster than expected—given the healthy cash levels. And that has the potential to kick off an upcycle for a few years.

Given the above factors, it isn’t surprising that India Inc is more confident about its future. However, near term risks from consequent Covid waves, the surge in commodity prices and likely inflation, on the back of ultra-loose liquidity remain. It, therefore, pays to keep a hawk-eye on valuations.

That said, there’s still value in pockets if you look hard enough. But don’t commit too much to equities just yet, with the market racing towards newer highs. The market will always offer opportunities to get in a good value.