Chennai: Nine of the eleven captive lions at Arignar Anna Zoological park, at Vandalur near Chennai have tested positive for SARS-CoV-2 infection, as per a statement issued by the zoo authorities. SARS-CoV-2 is the virus that causes the disease COVID-19.

Neela, a 9-year old lion housed in the zoo, died on Thursday evening, after showing some nasal discharge on Wednesday. Authorities maintain that the lion was provided treatment immediately after it displayed symptoms.

According to zoo authorities, it was on May 26 that five lions in the Animal House 1 of the Safari Park area were reported to show loss of appetite (anorexia) and occasional coughing. Following which, an in-house veterinary team along with those from Tamil Nadu Veterinary and Animal Sciences University (TANUVAS) took immediate action and offered treatment. 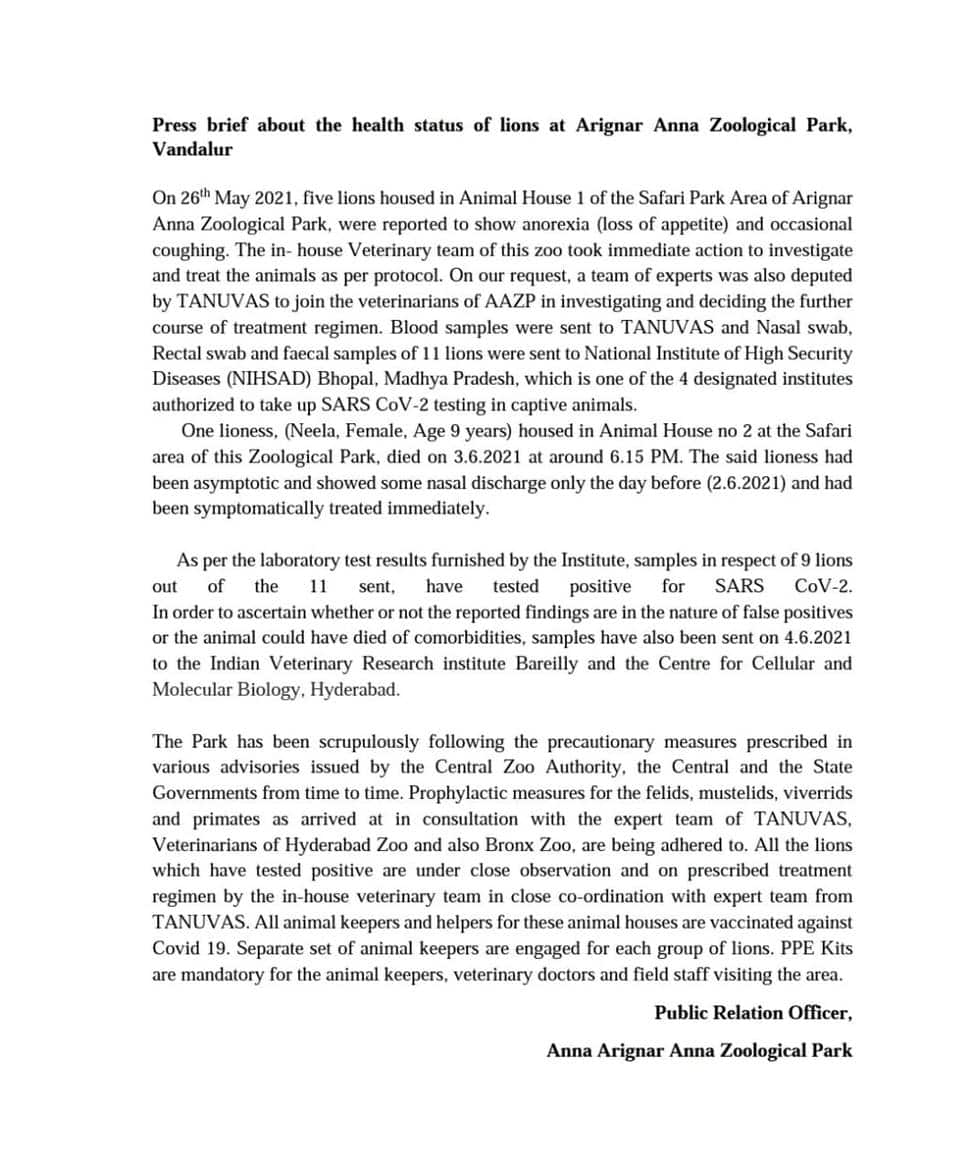 The blood samples and nasal swabs were sent to TANUVAS. While, rectal swab and fecal samples of the 11 lions were sent to National Institute of High Security Diseases (NIHSAD) Bhopal, which is among the designated institutes to take up SARS COV-2 testing in captive animals.

As per the test results, nine of the 11 lions tested COVID-19 positive. In order to ascertain whether or not the reported results are false positives or the animal could have died of other complications (comorbidities), further samples have also been taken.

They were sent on Friday to the Indian Veterinary Research institute Bareilly and the Centre for Cellular and Molecular Biology, Hyderabad.

“All the lions which have tested positive are under close observation and on prescribed treatment regimen by the in-house veterinary team in close co-ordination with expert team from TANUVAS. All animal keepers and helpers for these animal houses are vaccinated against COVID-19. Separate set of animal keepers are engaged for each group of lions. PPE Kits are mandatory for the animal keepers, veterinary doctors and field staff visiting the area,” the statement read.

The Zoo authorities maintain that they have been following the precautions issues by the Central Zoo Authority, the Central and the State Governments from time to time. They also add that measures to prevent diseases(prophylactic measures) are being undertaken for the different families of animals such as felids (cats), mustelids (mammals of the weasel family), viverrids(small-medium mammals) and primates. These disease preventive steps are said to be taken in consultation with experts from TANUVAS, Veterinarians of Hyderabad Zoo and Bronx Zoo.