Arguably the numbers speak for themselves: Chrono24 which analyses tens of thousands of monthly transactions reported that the prices for the ten bestselling Audemars Piguet models went up by 73 percent between July 2015 and July 2020. Patek Philippe on the other hand saw an even more impressive appreciation, with prices increasing by an average of 105 percent over the same five years. Moreover, the wider impact of these brands is notable; in 2018 one in eight Hip Hop songs that charted mentioned Patek Philippe, and as Jay Z cites “I don’t get the bright watch, I got the right watch, I don’t buy out the bar, I bought the nightspot I got the right stock”. So what’s exactly behind these asymmetric returns and are there some deeper fundamentals to it?

Ironically factors such as the history and heritage of the brand, initial capital expenditure as well as the marketing and storytelling placed on the individual timepiece may not necessarily translate into price appreciation. In fact, data indicates that most watches within the luxury segment depreciate in value and even different models under the same brand can vary vastly in terms of return on investment.

However, some timepieces buck this trend and the payoff can be big. Richard Mille, a brand just over a decade old is an example of this. When the RM-11 first came out they had an approximate price range of $50,000—$60,000, today these are selling from $175,000—$250,000. A contributing factor to this was a strategy no watchmaker had ever made—within a year of its launch, it increased retail prices by 40 percent and cut production by over 70 percent.

Patek Philippe is a further illustration of the impact restricted supply can have. As of December 2019, of the 58 most expensive watches sold at auction, 46 were produced by them. Established in 1839 they are estimated to have made approximately one million watches to date. To put that into perspective that figure is the equivalent number of timepieces made each year by most other luxury brands. Still maintaining its family-owned roots each watch is handmade and a detailed archive of its production history together with a unique identifier and name of the first buyer is logged at HQ. It can take up to nine months to produce one piece and such is the scarcity there can be an application process in order to obtain one.

The Patek Philippe Nautilus for example has an average waiting list of 10 years from authorised dealers with a recommended retail price of approximately $28,000. Not surprisingly, the watch is trading at a premium on secondary markets with any owners of this masterpiece that are able enough to part with it having their heavy hearts eased by nearly trebling their outlay and achieving approximately $80,000. Moreover, prices of the 5711 model within this segment jumped a further 25 percent in January 2021 on the announcement that it was to be discontinued. Although Rolex designed a chronograph in 1955 it was not until 1963 that it used the name Daytona after the world-famous Daytona Race track in Florida for what became one of its most famous models to date. Despite its name, however, it suffered a slow start. Early models were unloved and stood static in watch window displays. This was partly due to the first Daytona models still possessing a manual winding movement whilst competitors Breitling, Tag Heuer and Zenith being equipped with automatic movements. It was only over time that interest built arguably culminating in the 2017 milestone event when the original Rolex Daytona Paul Newman was sold for $17.7 million at auction. From the period of 2015—2020, an owner of a steel 116520 Daytona would have seen the value double from approximately $10,000 to $20,000. 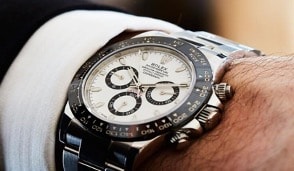 Similarly, launched in 1972 the Audemars Piguet Royal Oak also had a slow start. At the time Gerald Genta, the man soon to be known as the most significant watch designer of the era was seen to break too many watch-making rules at once. A bold stainless steel case together with the octagonal bezel with eight trademark screws was an outlier and not exactly sought after. Yet as trends evolved and the allure of sports watches developed, fortunes changed. Other factors attributed to its rise and iconic status today include social media influencing and a slick corporate management team. In 2015, these blue dial pieces were trading for around $18,000, but on the current secondary market a similarly unworn, factory condition example would set you back over $32,000.

Comparatively, over a similar period, the FTSE 100 is down approximately 7 percent, compounded in real terms when also considering GBP—USD depreciation. The exception of new economy tech stocks and Crypto must be noted, but other asset classes and more specifically traditional ‘blue-chip’ stocks in telecoms, energy, real estate and banking have fared much worse. And whilst the S&P, segments of the BSE SENSEX and commodities such as gold have held record periods, returns are not in the league of some timepieces, equalling numbers most hedge fund managers would more than welcome. Such has been their performance that in the words of Meek Mill, “Audemar on my wrist, bust down, we poppin bottles like I scored the winning touch down.”

—Shiv Morjaria is a derivatives lawyer for an investment bank and tech entrepreneur. The views expressed are personal and do not constitute advice