The Cabinet Committee on Economic Affairs, chaired by Prime Minister Narendra Modi, has approved the increase in the Minimum Support Prices (MSPs) for all mandated Kharif crops for marketing season 2021-22.

The government has increased the MSP of Kharif crops for marketing season 2021-22, to ensure remunerative prices to the growers for their produce. The highest absolute increase in the MSP over the previous year has been recommended for sesamum (Rs 452 per quintal), followed by tur and urad (Rs 300 per quintal each).

Similarly, for Oilseeds, the government has approved an ambitious plan for the free distribution of high-yielding varieties of seeds to the farmers for the Kharif season 2021 in the form of mini-kits. The special Kharif programme will bring an additional 6.37 lakh hectare area under oilseeds and is likely to produce 120.26 lakh quintals of oilseeds and edible oil amounting to 24.36 lakh quintals.

In the case of groundnut and nigerseed, there has been an increase of Rs 275 per quintal and Rs 235 per quintal, respectively, as compared to the last year. The differential remuneration is aimed at encouraging crop diversification. 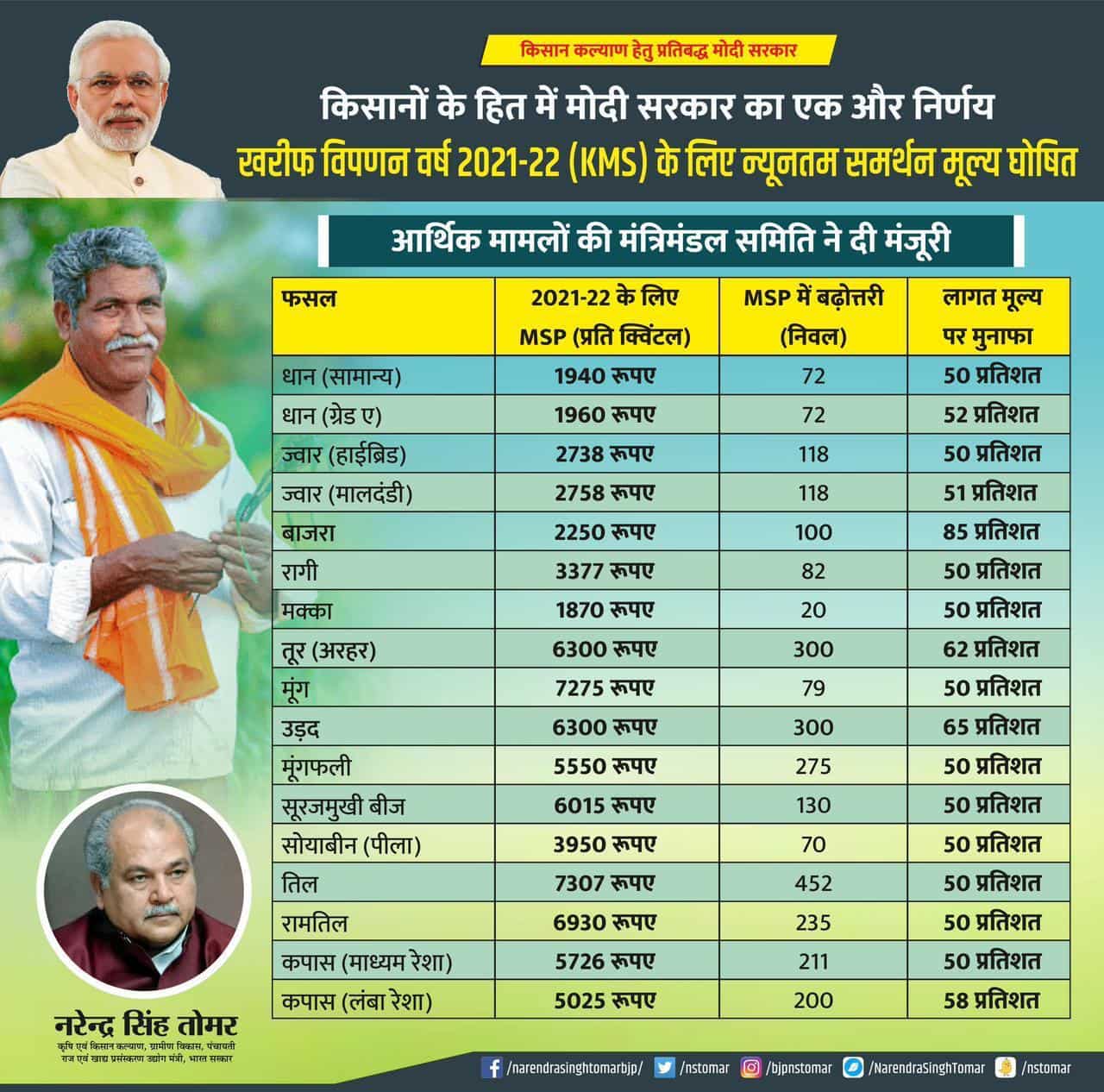 The increase in MSP for Kharif Crops for marketing season 2021-22 is in line with the Union Budget 2018-19 announcement of fixing the MSPs at a level of at least 1.5 times of the All-India weighted average Cost of Production (CoP), aiming at reasonably fair remuneration for the farmers.

Concerted efforts were made over the last few years to realign the MSPs in favour of oilseeds, pulses and coarse cereals to encourage farmers shift to larger area under these crops and adopt best technologies and farm practices, to correct the demand-supply imbalance. The added focus on nutri-rich nutri-cereals is to incentivise its production in the areas, where rice-wheat cannot be grown without long-term adverse implications for groundwater table.

Besides, the Umbrella Scheme ‘Pradhan Mantri Annadata Aay Sanraks Han Abhiyan’ (PM-AASHA) announced by the government in 2018 will aid in providing a remunerative return to farmers for their produce. The Umbrella Scheme consists of three sub-schemes like Price Support Scheme (PSS), Price Deficiency Payment Scheme (PDPS) and Private Procurement and Stockist Scheme (PPSS) on a pilot basis.

With an aim to attain self-sufficiency in the production of pulses, a special Kharif strategy has been prepared for implementation in the ensuing Kharif 2021 season. A detailed plan for both area expansion and productivity enhancement for Tur, Moong, and Urad has been formulated. Under the strategy, all the available high-yielding varieties (HYVs) of seeds will be distributed free of cost to increase area through the intercropping and sole crop.