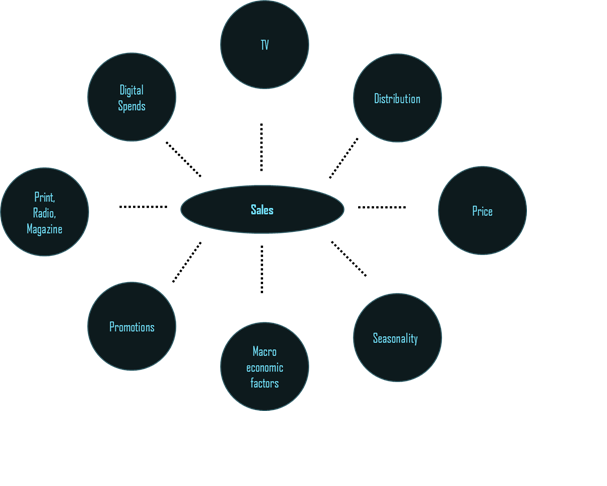 MMM uses the Regression technique and the analysis performed through Regression is further used for extracting key information/insights.

In this article, I will talk about various concepts associated with understanding MMM.

An equation is formed between the dependent variables and predictors. This equation could be linear or non-linear depending on the relationship between the dependent variable and various marketing inputs. There are certain variables like TV advertisement which have a non-linear relationship with sales. This means that increase in TV GRP is not directly proportional to the increase in sales. I will discuss about this in more detail in the subsequent section.

The betas generated from Regression analysis, help in quantifying the impact of each of the inputs. Basically, the beta depicts that one unit increase in the input value would increase the sales/profit by Beta units keeping the other marketing inputs constant.

2. Linear and Non-Linear Impact of predictors:

Certain variables show a linear relationship with Sales. This means as we increase these inputs, sales will keep on increasing. But variables like TV GRP do not have a linear impact on sales. Increase in TV GRPs will increase sales only to a certain extent. Once that saturation point is reached, every incremental unit of GRP would have a less impact on sales. So, some transformations are done on such non-linear variables to include them in linear models.

So to consider TV GRP as one of the modeling inputs, it is transformed into adstock.

3. Base Sales and Incremental Sales:

In Market Mix Modeling sales are divided into 2 components:

MMM results can be used further to perform deep dive analysis. Deep Dives can be used to assess the effectiveness of each campaign by understanding which campaigns or creatives work better than the other ones. It can be used to do a copy analysis of creatives by genre, language, channel etc.

For any business, Budget optimization is one of the key decisions to be taken for planning purposes.

MMM assists marketers in optimizing future spends and maximizing effectiveness. Using MMM approach, it is established that which mediums are working better than the other ones. Then, budget allocation is done, by shifting money from low ROI mediums to high ROI mediums thus maximizing sales while keeping the budget constant.

So folks, this was a brief about Market Mix Modeling. Stay tuned for more articles on MMM.