Sports presenter Sanjana Ganesan and her husband and Tean Indian paceman Jasprit Bumrah. While the Mumbai Indians speedsters was seen in action against New Zealand in the inaugural World Test Championship Final, Sanjana was working behind the scenes with host broadcasters Star Sports for the coverage of the game. It was a disappointing outing for Bumrah, who finished wicketless in the game, which India went on to lose by eight wickets.

Team India now have a break of three weeks before they assemble in London ahead of the first Test against England in Nottingham starting on August 4. Bumrah is now enjoying this break with his wife Sanjana Ganesan, who also gets a break from her broadcasting duties for the time being.

Sanjana tried to cheer up her husband’s mood by cooking up a romantic meal for Bumrah at the team hotel. She posted a image of the meal in an Instagram story and captioned it ‘Made with Love’ on the picture. The meal appears to be garlic bread with a bowl of pasta.

Here is the picture posted on Sanjana Ganesan’s Instagram story… 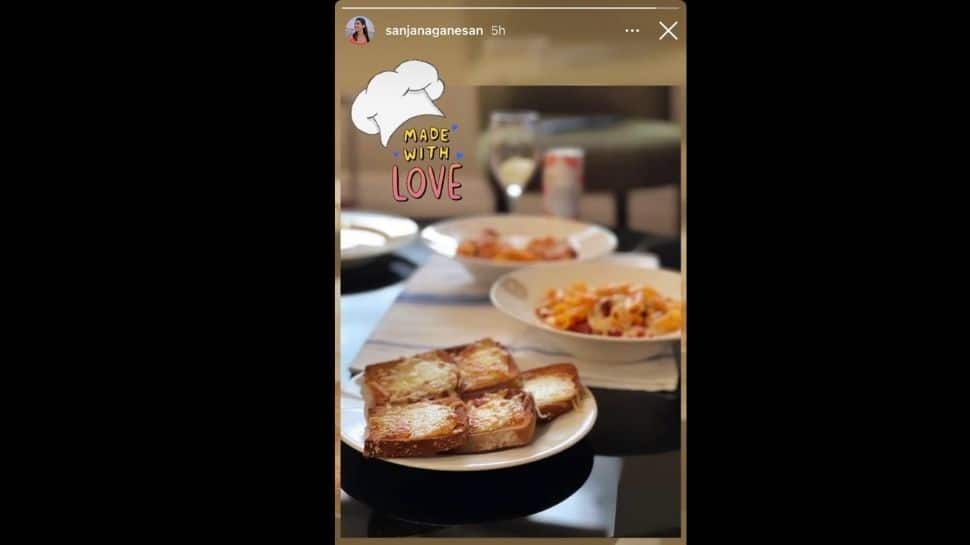 The paceman had picked up 34 wickets in 10 WTC games at an average of 24.08 with two five-wicket hauls to his name. He got married to Sanjana Ganesan in February this year and the couple are on their first overseas cricket tour together.