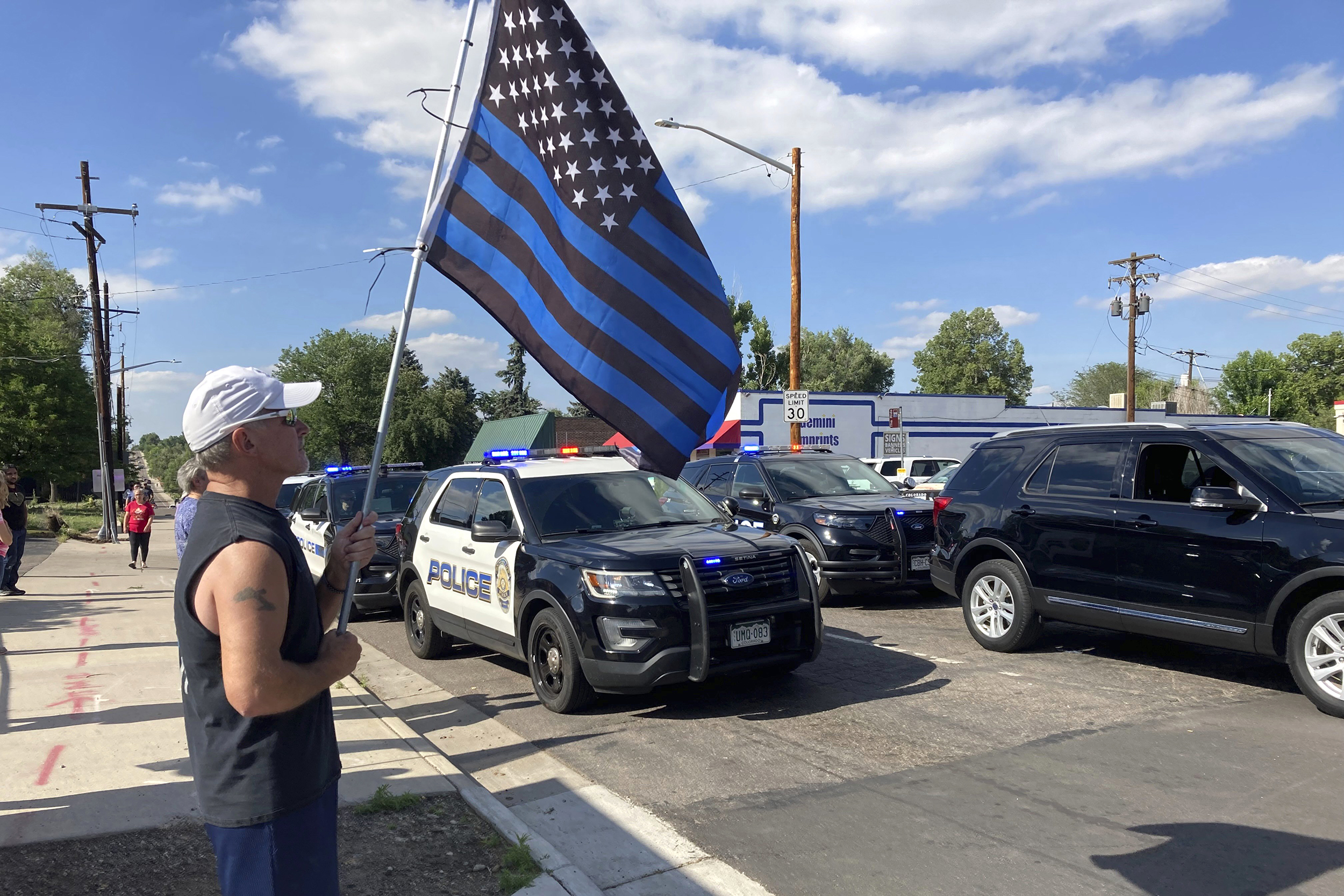 A Colorado man hailed as a hero for shooting a suspect who fatally gunned down a police officer this week was killed by police while holding the suspect’s rifle, police said Friday.

The incident in which all three people were killed began when Officer Gordon Beesley was “brutally ambushed and murdered” by a man with a shotgun Monday in Arvada’s historic Olde Town, the police chief said. The gunman then armed himself with an AR-15, police said.

Bystander John Hurley, 40, drew his handgun and shot suspect Ronald Troyke, 59, stopping him from hurting anyone else, police said.

“What happened next is equally tragic,” Police Chief Link Strate said in a video. “A responding Arvada officer encountered Mr. Hurley, who was holding a rifle. And our officer shot him.”

Beesley was responding to a call of a suspicious person in the Olde Town Square, which is about 7 miles northwest of downtown Denver, when he was killed, police said. The suspicious person call involved a report of an older man who walked up to some teens, made a noise and then showed them a condom.

Surveillance video released by police Friday shows the officer walking toward the square when a man parks a truck behind him and gets out with a gun.

He runs up behind the officer, and the officer is seen turning before he is shot. Police said Troyke yelled and shot Beesley twice with a shotgun as soon as the officer turned. Troyke then allegedly shot out the windows of parked police vehicles and into the air.

The video shows people running and the gunman returning to the truck to get a rifle that police said was an AR-15 and walking back toward the square. The video released by police ends there and does not show Hurley.

Hurley shot Troyke with his own handgun and was holding that AR-15 when the other officer arrived and shot him, police said.

Strate called Hurley a hero who acted courageously and without hesitation. “Mr. Hurley’s actions saved others from serious injury or death,” he said.

Around an hour before the shooting, Troyke’s brother asked for a welfare check, saying Troyke was going to “do something crazy,” police said.

Beesley and another officer went to Troyke’s home but couldn’t contact him, police said. Police said they later found a note with threats that included “Today I will kill as many Arvada officers as I possibly can” and “This is what you get, you are the people who are expendable.”

Hurley’s family issued a statement late Friday saying they were thankful for support from the city and police and were waiting for the outcome of the third-party investigation into the shooting.

The police shooting is under investigation by a “critical incident response team,” which is made up of law enforcement officials from across Jefferson County, Sheriff Jeff Shrader has said. It will make a recommendation to the district attorney who will decide if the officers’ actions were appropriate.