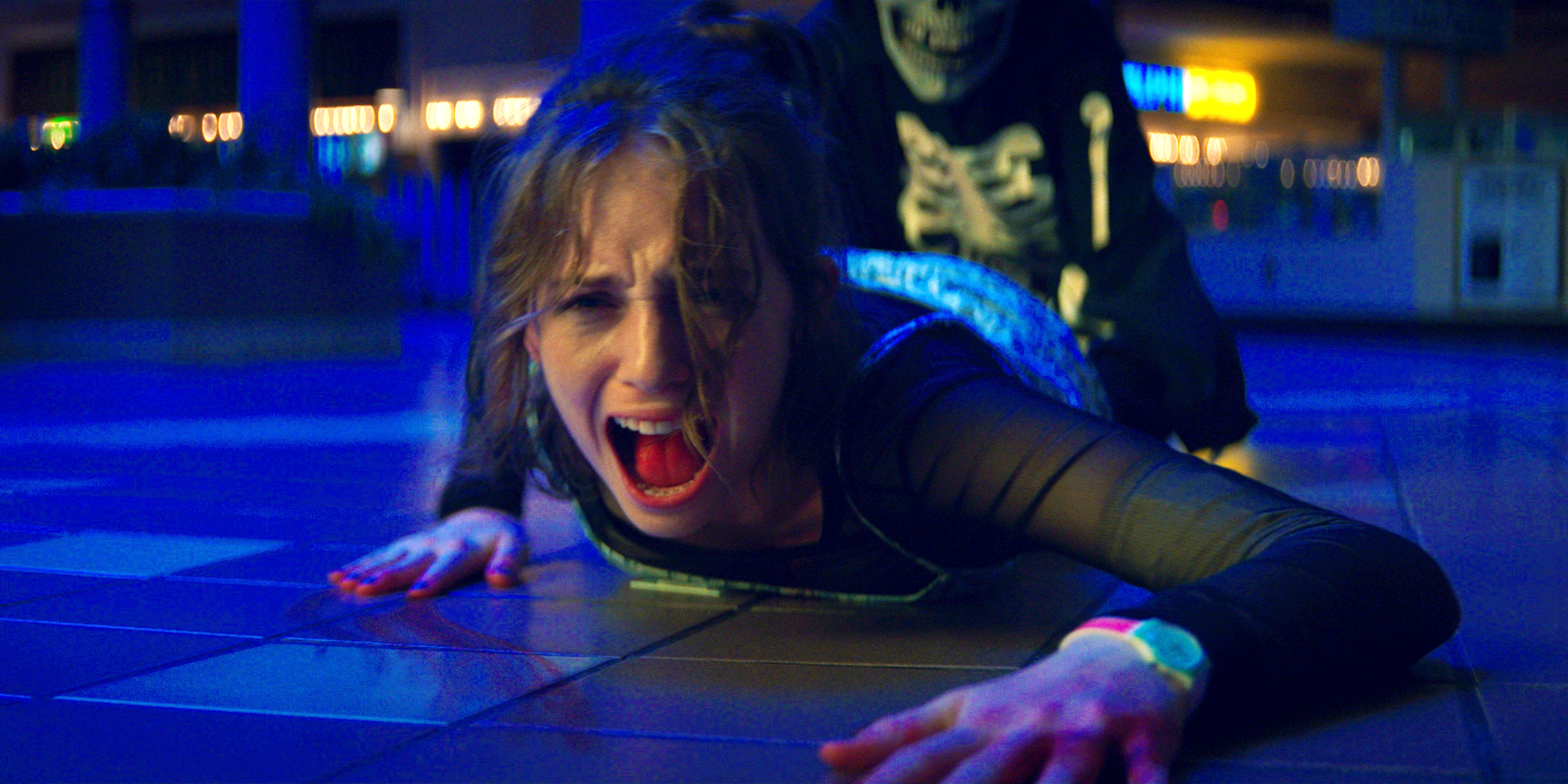 In Netflix’s “Fear Street Part 1: 1994,” a young woman working late at the now-defunct mall bookstore B. Dalton asks for a ride home from her goofy, harmless-seeming friend, who works at the tasteless novelty shop down the hall. He says sure — then a fly lands on him and buzzes away.

It’s not anything like the scariest moment in the film, but that little twinge of dread — What’s wrong with that guy? Is he dead? — will be catnip to fans of the old John Carpenter and Wes Craven gore-fests like “Halloween” and “Nightmare on Elm Street.” Director Leigh Janiak lovingly subverts them both (and more) in this first installment of her shockingly ambitious trilogy of horror films on Netflix, which are kinda-sorta based on the hugely popular “Fear Street” series of young-adult novels published under the name of “Goosebumps” creator R.L. Stine (but famously ghostwritten).

That’s a good hook for curious millennials, but Janiak’s sweeping pop-horror epic is a lot cleverer than its source material.

“1994” owes a lot to Craven’s first “Scream” movie, from its terrifying red-herring opening sequence to its cast of high school misfits (in particular, Fred Hechinger’s Simon is a dead ringer for the various stoner outcasts Matthew Lillard used to play). But the movie is also pleasantly original, expertly weaving teenage gay anxiety into its broader tapestry of horror, and the scenes between its leads, Kiana Madeira and Olivia Welch, are perfectly, clumsily sweet and tender in direct proportion to the movie’s supply of gore (one character dies in a bread slicer).

This is the singular vision of a monstrously talented director; it didn’t really have to be a nostalgia play based on once-trendy paperbacks.

The “rules” of classic horror films have always been puritanical — that’s one of the big jokes in the “Scream” movies — but Janiak is here in the series to both further subvert them and take the fight all the way back to the Puritans themselves: After a stopover in the Carpenter horror era for “Fear Street: 1978,” the final installment of the trilogy takes place in the 17th century (which horror fans remember best for the Salem witch trials).

But kicking things off in 1994, we have a classic slasher film with some clever twists. Deena (Madeira) and her nerdy brother Josh (Benjamin Flores Jr.) live in the dangerous town of Shadyside — the evil twin of bucolic Sunnyvale, which is a pleasant place populated by jocks who make it their mission to be obnoxious to the people of Shadyside. Shadysiders have other problems, though: Their town is the murder capital of the universe.

The killings mostly seem to be the work of locals who just went nuts — an indictment of the hopeless Shadyside culture that produced them, according to the sheriff who’s constantly on TV condescending to the victims and hyping the crime rate — but to the people suffering, the random murder sprees create an atmosphere of distrust, as well as some understandable bitterness at a wider world that seems to think they deserve it. (If you read much crime journalism, this dynamic will seem pretty familiar.)

While that atmosphere of paranoia and hopelessness is unpleasant for the characters, it’s perfect fodder for a horror film, especially one set among teens who haven’t yet given up on each other or themselves. The apathy of grown-ups is a constant danger in the movie’s background: Deena and Josh’s absentee dad is an alcoholic, anesthetized waste of space, according to them, so beaten down by the misery of his own life that he doesn’t have time to raise them. So they — with the help of the nascent internet — raise themselves, but they’re constantly afraid that all the misery will eventually be too much for them, too, and that they’ll end up in the same zombified state.

It’s a good hook for curious millennials, but Janiak’s sweeping pop-horror epic is a lot cleverer than its source material.

Becoming like their parents is a fear most teens have, but here it seems to have a supernatural valence. Why are things so bad in Shadyside? The answer seems to lie with the witch whose bones are buried there — Sarah Fier (yes, pronounced “Fear”), who was executed in 1666 and whose evil ghost is behind the gruesome murders.

On some level, this project is so ambitious that it’s a little weird. This is the singular vision of a monstrously talented director; it didn’t really have to be a nostalgia play based on once-trendy paperbacks.

I’m glad it was, though: There’s a tradition of elaborate, interconnected film series that investigate a broken culture through the lens of a series of heinous crimes — the trilogy of “Red Riding” films, adapted from David Peace’s novels about the Yorkshire Ripper murders, is one much-praised example — but I can’t remember another project that is this much pure fun.

Janiak seems intent on giving us all the things we want from a light horror flick: teen angst, ridiculous gore, a familiar period setting and songs anyone who spent high school trapped in the 1990s will remember. But it also has bones to pick with the same period: Why did we let broadcast news feed us reactionary talking points about crime? Why did we terrorize LGBTQ teenagers? Why did we let poverty doom so many bright kids when, as a society, we had all the money in the world?

In “Fear Street” (the first part, at least), those bones our heroine has to pick are quite literal. Janiak doesn’t let the viewer off the hook easily.

Sam Thielman is a reporter and critic based in New York. He is the creator, with film critic Alissa Wilkinson, of Young Adult Movie Ministry, a podcast about Christianity and movies, and his writing has been featured in The Columbia Journalism Review, The Guardian, Talking Points Memo and Variety. In 2017 he was political consultant for Comedy Central’s “The President Show.”