New Delhi: Bollywood actress Kangana Ranaut‘s sister Rangoli Chandel has launched a hit at Taapsee Pannu’s latest release ‘Haseen Dillruba’ on her social media. Just days ago, Kangana had retaliated to Taapsee’s comment calling her ‘irrelevant’ and now it appears the ‘Queen’ actress’s sister has taken to Instagram to celebrate negative reviews of Taapsee’s film. On her Instagram stories, she shared a screenshot of a Twitter review of the film and wrote her comments on Taapsee’s performance beside it.

She wrote, “Mafia created fraud is being exposed but only in hush-hush whispers no one is openly saying it, so I decided to do the deed, a single tone actor who has absolutely no screen presence no range no real persona or screen presence, is being pitted against one of the greatest actors Indian cinema ever saw…not only she openly mimics and copies Kangana but also calls her irrelevant and double filter, aaj isko bhi critics ne nanga kar diya. Ye gubbara bhi footna hi tha, foot gaya.” 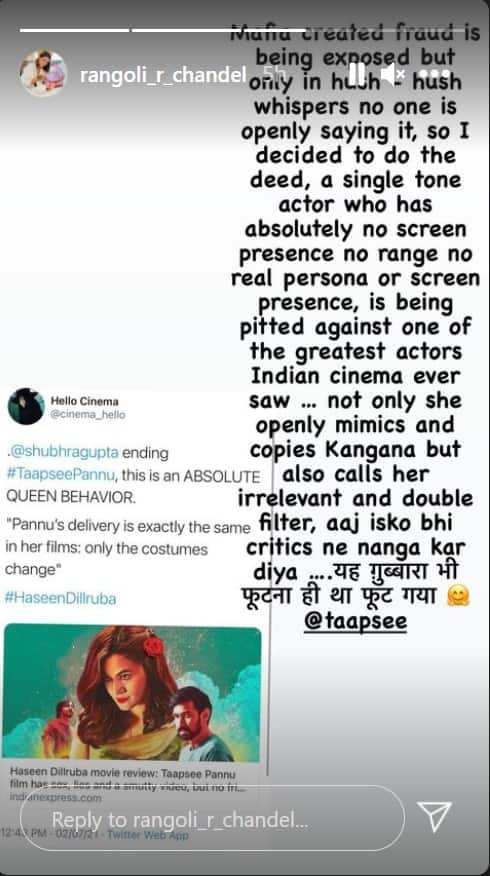 Earlier, Kangana and Taapsee had gotten into an online verbal spat. In an interview with Hindustan Times, Taapsee Pannu was asked if she misses Kangana from Twitter after her account was banned, to which the former said, “No, I don’t miss her. I didn’t miss her, or want her, also before. She’s too irrelevant for me, in my personal life. She’s an actor, she’s a colleague in that respect. But more than that, she doesn’t hold any relevance in my life. I don’t have any feelings for her, good or bad.”

To this, Kangana reacted quite explosively and accused Taapsee of using her name to promote her latest release ‘Haseen Dillruba’.

On the work front, Taapsee will next be seen in ‘Looop Lapeta’, ‘Rashmi Rocket’, and ‘Shabaash Mithu’.

On the other hand, Kangana will be seen making her digital debut as a producer with the upcoming film ‘Tiku Weds Sheru.’ She also has ‘Thalaivi’, a biopic on late legendary actress turned politician J Jayalalithaa in her kitty. The film’s release was postponed due to the COVID outbreak.

She is also part of the films ‘Tejas’ and ‘Dhaakad’ among others.