New Delhi: In a shocking turn of events, Telugu actress Mehreen Pirzada has broken off her engagement with politician Bhavya Bishnoi as per her social media announcement on Saturday (July 3). She expressed that the decision was taken amicably and in their ‘best interest’.

On her Instagram story, he wrote, “Bhavya Bishnoi and I have decided to break off our engagement and not go ahead with the wedding. It’s a decision that has been taken amicably and in the best interest. With respect in my heart, I would like to say that from now on I have no further association with Bhavya Bishnoi, any of his family members or friends. This is the only statement I will be making regarding this, and I hope that everyone respects my privacy as this is a very private matter. Meanwhile, I will continue to work and am looking forward to giving my best in my future projects and performances.” 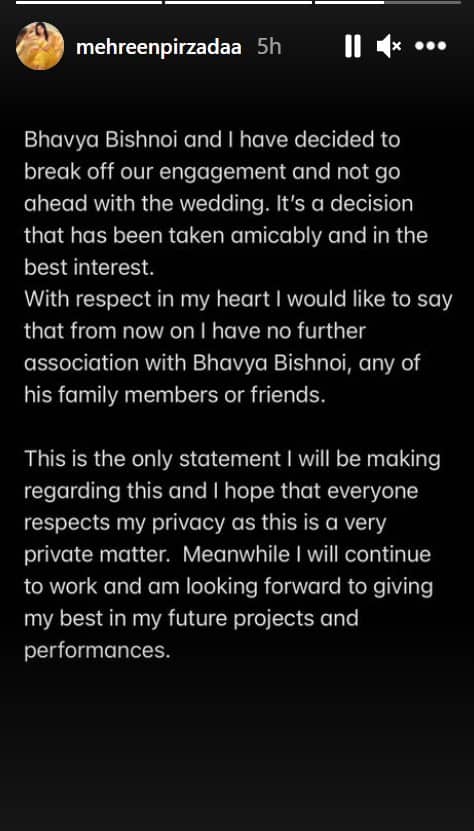 Incidentally, Bhavya Bishnoi also took to social media to address the situation and announce to his followers about the couple deciding to part ways.

He wrote on his Twitter, “Two days ago, Mehreen and I mutually decided to call off our engagement due to differences in values and compatibility. I walk away from this with my head held high knowing I left no stone unturned to show utmost love and respect to Mehreen and her family. I walk away with no regrets. I suppose we were too good for each other, and destiny would have it otherwise. For some people spreading falsehoods about my family and me, I don’t owe you an explanation. But if your lies come to my knowledge, I will personally and legally hold you accountable for them. My family and I live with integrity, and have the highest respect for women. If untrue mud-slinging makes you happy, then please seek help.”

“I wish nothing but love, happiness, and fulfilment to Mehreen and her family. I will always hold her family and friends in the highest regard, and cherish our happy and blessed experiences. I also wish Mehreen the best of luck for her future projects and performances,” he added.

Mehreen and Bhavya, the son of Kuldeep Bishnoi, had gotten engaged in March 2021. However, it appears the two have broken their engagement off after less than 3 months.

The actress made her acting debut with the film ‘Krishna Gaadi Veera Prema Gaadha’ which did quite well at the box office. Later, in 2017, she debuted in Bollywood with the film Phillauri alongside Anushka Sharma, Diljit Dosanjh and Suraj Sharma.