Alphabet is recognized worldwide for being an American multinational whose main subsidiary is Google. It develops products and services related to the Internet, software, consumer electronics, electronic devices. It is a holding company that is dedicated to the business of acquisition and operation of different companies, Google’s segment includes its main internet products such as ads, Android, Chrome, hardware, Google Cloud, Google Maps, Google Play, Search and YouTube. The company will announce its earnings results after the market close next Tuesday, July 27. A week before its publication, Alphabet opened at $2,585.08 , has a debt-to-equity ratio of 0.06, a forward  ratio of 3.09 and a current ratio of 3.10 , its stock has a market capitalization of $ 1.73 trillion , a P/E ratio of 34.41 , a price-to- earnings growth ratio of 1.62, and a beta of 1.00 , it also has a 50-day simple moving average of $2,480.69 , a 12-month low of $1,406.55, and a 12-month high of $2,659.92 , according to MarketBeat data.

While the company was expected to post earnings of $ 15.66 per share for the most recent quarter, Alphabet reported $26.29 per share, representing a surprise of 67.88%, Nasdaq highlights that with the earnings history in mind, the recent estimates have moved to the upside for the company, they consider that the ESP profit of Zacks for Alphabet is positive, which is a great sign of the rate of profit especially when you combine this metric with its product range. Zacks currently has an ESP earnings of +5.41, Suggesting that analysts become optimists on their potential for short -” term gains, combined with the rank No. 2 of Zacks (buy) action, s possibly the company continues to reap a roll to beat estimates earnings, especially when looking at the two previous reports, as the average surprise for the last two quarters was 54.02%.

One point worth considering for the company’s upcoming long-term earnings results is the Google Cloud business, as the total loss for the commercial segment improved to $974 million from $1.73 billion in the prior year period, has also considerably improved the efficiency of the commercial segment, losing $0.24 per dollar of sales in the most recent period versus $0.62 per dollar of sales in the prior year period, said business could approach -” $20 billion in 2021 if the company can maintain its average sequential quarterover-quarter growth rate of -“10% , so Alphabet has the necessary elements to accelerate the growth of the cloud segment, but it should be noted that Alphabet already has a global computing infrastructure on par with Amazon and Microsoft, leaders in this business segment, reports SeekingAlpha.

For Alphabet’s next earnings release, revenue is expected to rise 46% to $ 56 billion, while earnings per share (EPS) is forecast to rise 90% to $ 19.26. The company continues to trade at a relatively high price-to-earnings ratio, at 32.11 , with no dividend yield currently, some brokers rate the company highly, with 16 “strong buys” and 28 “buys” and only two “hold” recommendations, while the price is near a new high, having bounced in early May from the 50-day simple moving average, currently at $ 2470 , it should be noted that it is the fundamentals and technical aspects that support that the company has achieved enormous earnings over the last year and have found a new lease of life as money flows back to growth names.

Alphabet has maintained a bullish rally since its inception, at the beginning of the year it entered the range after breaking its psychological support of 2000, until 2116, ending up breaking the range to the upside and managing to mark a maximum up to 2439.60 and then falling back to its support marking a minimum at the beginning of May at 2230, from this minimum the price has continued with a strong upward trend, managing to exceed the psychological level of 2500. Today it remains above 2700 with a current price of 2757.35After a gap that could be continuation or exhaustive (if the price fails to hold) which has pushed the price and marked a new all-time high at 2778.70, the price could continue to rise to the next psychological level at 2800 already very close and if we can maintain it, we could rally to the next resistance that marks the FE 161.8 at 2939.54, approaching the psychological level of 3000. 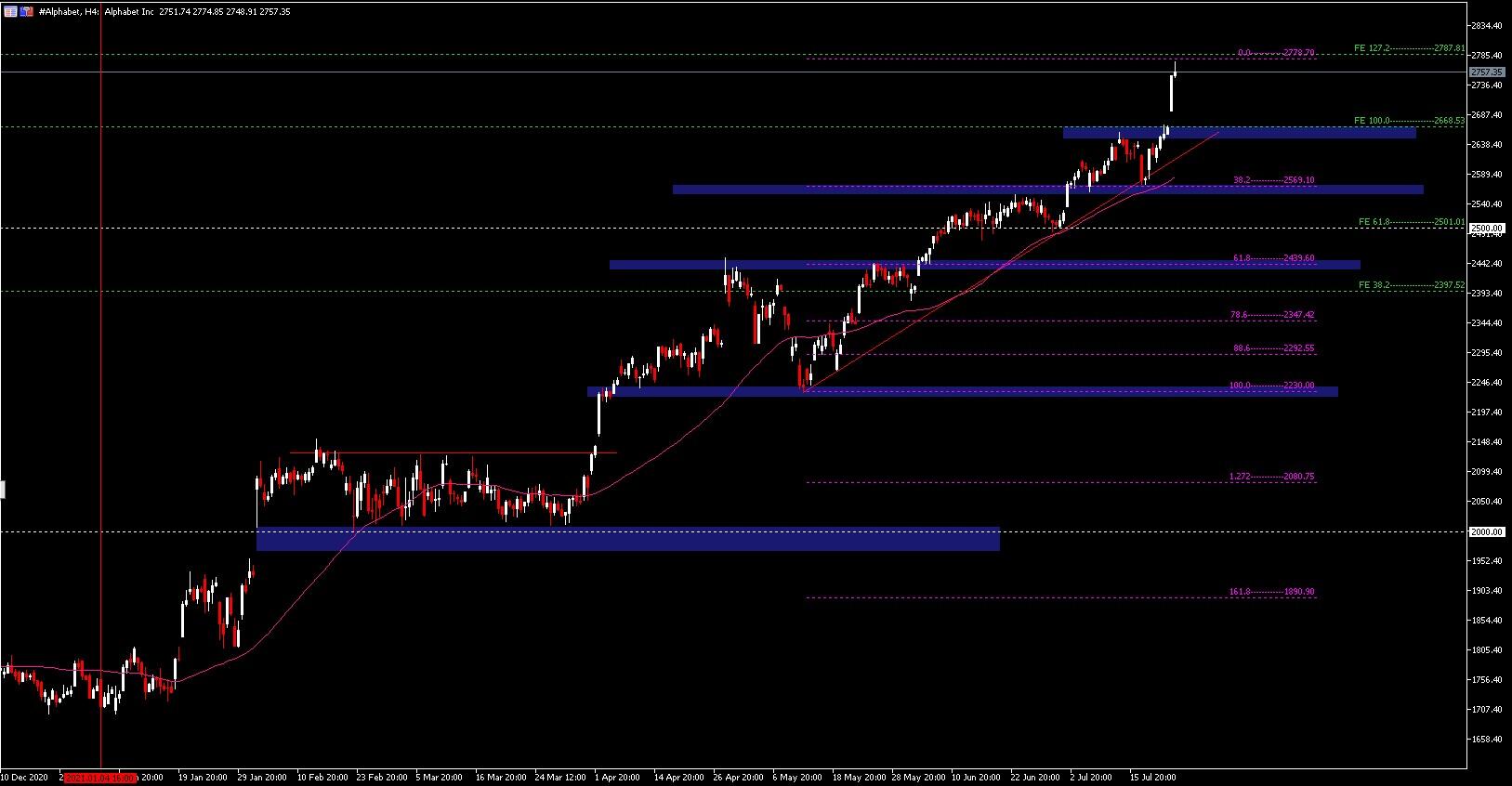 Another company that will present the earnings results for the quarter on July 27 is Microsoft, Wall Street expects a year-over-year increase in earnings over higher revenues when it reports the results. The report could help stocks rise if these key numbers are better than expected, otherwise the stock could decline. yahoo!finance expects the software maker to post quarterly earnings of $ 1.90 per share in its next report, representing a yearover-year change of +301, 1% and that revenues are $ 44.07 billion , 15.9% more than in the prior year quarter. Over the past four quarters the company has exceeded consensus EPS estimates four times.

Analysts highlight that the earnings season is taking place at the same time that Microsoft shares have reached a new record, after beating forecasts in the last publication of quarterly results, , accompanied by a solid orientation for the rest of its year, coupled with the highest overall growth in revenue since 2018. Like Alphabet, the growth prospects for its key cloud computing division are good, after a year in which the SaaS market (which is a model of delivery software based on the cloud and in which the provider makes the software accessible to customers through the internet), rose to 19.7% , it is considered that Microsoft is a quality stock, with good expected earnings growth and solid momentum behind the share price, with 38 times earnings and a return of 0.8% , has 37 recommendations for “strong buy” or “Buy” and only two “holds” with no sales recommendations from brokers.

For the quarter ending March 31, the software and hardware maker posted 19% annualized revenue growth, the largest quarterly increase the company has posted since 2018, thanks partly to gains in PC sales. Resulting from shortages driven by the coronavirus pandemic, it posted earnings of $ 1.95 per share and revenue of $ 41.71 billion , the company also said its public cloud Azure, which competes with market leader Amazon Web Services, grew one 50% , so in the segment of smart cloud Microsoft generated revenue of $ 15.12 billion in the third fiscal quarter, up 23%more year-over-year so far this year, Microsoft shares are up 18% compared to a gain of around 12% for the S & P500 over the same time period; Regarding guidance, Microsoft expects $ 43.6 billion to $ 44.5 billion in revenue in the fiscal fourth quarter, while in the middle of the range that would represent growth of 16% more than the consensus estimate of $ 42, 98 billion among analysts surveyed, reports CNBC.

Microsoft maintains a bullish rally after breaking an equilateral triangle to the upside at the beginning of the year making a pullback to the triangle’s guideline and marking a low at 224.25 at the end of February and later breaking the psychological level of 250.00 and supporting itself with false breaks in the SMA of 100 H4 periods marking minimum in May at 238.06. From there the price managed to stay above 250 and mark a strong uptrend until today that has marked new historical highs at 289.95 already a few steps from his psychological level of 300.