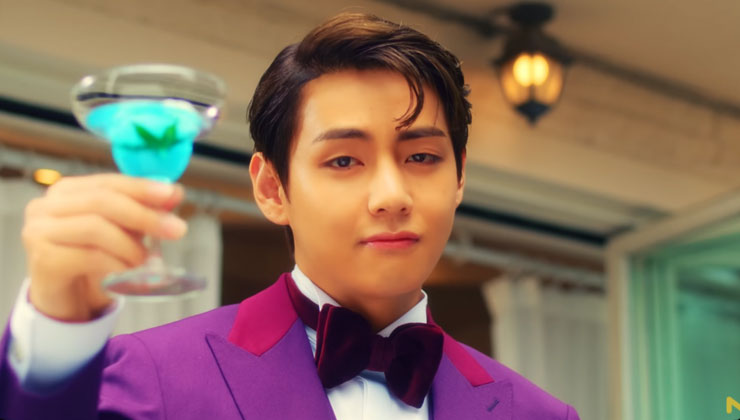 The Wooga Squad is back and we can’t help but smile. BTS member V was joined by his Hwarang Wooga Squad Park Seo-joon, Choi Woo-shik and Park Hyung-sik as they made an appearance in the music video of singer Peakboy which was titled Gyopo Hairstyle. But, that’s not it Kim Taehyung gave strong Gatsby vibes as he cheered in the camera with his blue drink. Well, Taehyung posed as a waiter in the music video but we cant ignore the royal vibes in the vibrant purple suit.

Gyopo Hairstyle is composed and written also sung by Peakboy. The track was announced earlier this month. The singer has revealed that his friends and the Wooga Squad- BTS member V, and actors Park Seo-joon, Choi Woo-shik and Park Hyung-sik will be part of the music video and isn’t it just a treat.

Oscar-winning movie Parasite actor Choi Woo-shik was seen playing a photographer, later Strong Girl Bong-soon actor Park Hyung-sik was seen as a customer at a food joint. What’s Wrong With Secretary Kim actor Park Seo-joon was seen playing a production manager of a talk show. Finally, the much-awaited BTS member V made a dashing entry as a server with a drink dripping in style.

Check out the video below:

Talking about Gyopo Hairstyle, according to Soompi, Peakboy wanted to give the message that, “Let’s choose what we like instead of worrying about what other people think. That’s how you can gain confidence and be happy.”

Meanwhile, BTS has been making headlines as The President of South Korea, Moon Jae In, has appointed BTS as the ‘Special Presidential Envoy for Future Generations and Culture’. The K-pop band will attend the 75th UN General Assembly this year.