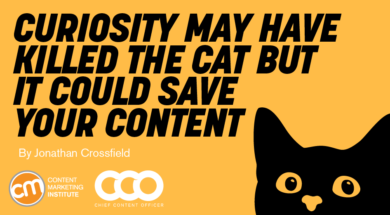 I recently spent an entire Saturday afternoon confirming exactly how many issues of the weekly British comic Princess Tina were published between 1967 and 1973. (Or rather 1974 – I eventually proved all of the published sources wrong. Take that, Denis Gifford, and your Complete Catalogue!)

Curiosity can be both obsessive and massively trivial. But everyone is curious in one way or another. After all, curiosity is what makes us human.

And, sometimes, it’s the seemingly trivial questions that lead to the most incredible findings. To Isaac Newton, a falling apple wasn’t just a bonk on the head but a question that demanded to be answered – and eventually lead to his theory of gravity. That’s some industrial-strength curiosity.

To the rest of us non-geniuses, curiosity is what pushes and pulls us every single day to try this, go there, read that, investigate the other.

It’s a big reason why people seek out content. It’s also what keeps someone reading or watching until the end. What’s the answer? Why did that happen? How does this end?

With any luck, curiosity can lead them to click on more links (hopefully ours) as they go further down whichever rabbit hole has captured their imagination.

Curiosity explains why people fall for clickbait, too. It may be tempting to take a darker, more manipulative approach to exploit curiosity. But it probably won’t pay off. Here’s why.

Curiosity keeps people clicking as they go down the rabbit holes that capture their imagination. But there are risks to manipulating curiosity in #ContentMarketing, says @Kimota via @CMIContent. Click To Tweet

You’re probably familiar with headlines like these: “Number Four Will Shock You” and “You Won’t Believe What Happened Next!” But clickbait isn’t always so blatant. Merely leaving out a crucial (but ultimately trivial) piece of information from a headline also signals clickbait territory. Consider this article from my news feed this morning: “Expat baffled by common Aussie supermarket item,” the headline blares.

It’s a common item you’ll find in Coles and Woolies, but one US woman has revealed she was left scratching her head trying to find it.https://t.co/CuT2SL0E35

What is this item?! Is it that baffling? She looks stunned. What are we doing in Australia that would deserve such a reaction from an expat? (To be honest, that’s probably a long list.)

Yes, I clicked (purely in the interest of researching this article, you understand).

The answer was a capsicum. If you’re reading this in the U.S., you call them peppers. Or bell peppers. Just know that you’re wrong. They are called capsicums. Oh, and the other, hotter peppers are chilis. You’re welcome.

Was the answer really worth a dramatic headline, never mind 500+ words of overstretched copy? It was thirty seconds of my life I won’t get back.

HANDPICKED RELATED CONTENT: Is Clickbait Ever Used for Good?

Another common clickbait technique uses the headline to pose a yes/no question. This form makes the reader curious by calling into question something they previously had no reason to doubt.

As Betteridge’s law of headlines states, “Any headline which ends in a question mark can be answered by the word ‘no.’”

Ian Betteridge of TechCrunch gave us his tongue-in-cheek maxim in a 2009 article that excoriated the practice. “The reason why journalists use that style of headline is that they know the story is probably bullshit, and don’t actually have the sources and facts to back it up, but still want to run it.”

Don’t panic. We’ve all used questions in our headlines at some point. But Betteridge’s law targets those headlines where the question is disingenuous. The curiosity is misplaced. The answer is as underwhelming as an expat’s capsicum.

Content marketing is far from immune to clickbait. I see social media posts and headlines that promise to reveal the one big trick, the five essential ingredients, the key to success in whatever field of interest the marketer is trying to target. Yet they fail to provide the slightest clue to whatever specific information lies beyond the link.

Of course, the trick, ingredient, or key almost always turns out to be more metaphorical capsicums – particularly for anyone with more than a basic understanding of the topic.

If your ideal audience persona is a novice or amateur still grasping the basics, then capsicum may be enough. But a novice won’t be satisfied for long and will soon start looking for more nutritious fare.

And capsicum content is certainly no good if you want to attract more experienced, skilled, or deeply curious readers. Of course, they’re also more likely to be high-value audience members such as influencers or even potential customers.

This is why appealing to curiosity can be extremely powerful when your content can deliver the goods.

Appealing to curiosity is extremely powerful – as long as your #ContentMarketing delivers deep enough answers, says @Kimota via @CMIContent. Click To Tweet

You might think interest and curiosity are virtually synonymous. If you’re interested in a topic, by definition, you should be curious to learn more about it.

Yet it’s possible for large swathes of your audience to be passively interested in your content without ever being actively curious. Consider how many cookbooks are purchased by people who never cook a single recipe contained in those pages. Or how many people avidly watch gardening shows when all they have is a window box.

Even then, it’s possible to be involved in an activity without necessarily being that curious about it. According to Amanda Markey and George Loewenstein of Carnegie Mellon University, interest and curiosity are distinct.

If an individual is interested in pottery, for example, that person may want to sit down and throw pots, or that person may want to know more about the technique, the materials, and the history. Curiosity, in contrast, according to our definition, only arises when a specific knowledge gap occurs, such as, ‘What is the difference between high and low fire pottery?’ Thus, interest and curiosity differ by their objects of desire (specific knowledge vs. general knowledge/activity engagement).

Yes, other definitions and theories of curiosity exist. But the idea that curiosity is a compulsion to seek out specific knowledge stood out as particularly relevant to me as a content marketer.

This isn’t specific knowledge in the sense of “How to create awesome Instagram Reels.” That’s appealing to an activity-based interest no different from throwing pots.

Instead of taking the information and advice at face value, the curious might be more interested in learning how and why a specific technique works.

In other words, some content is about providing quick answers just to get the job done – no further curiosity required. Other content seeks to explore, explain, or expand the topic to deepen the reader’s understanding and open up new possibilities – or even lead to new, independent conclusions.

In 2012, Loewenstein and Russell Golman published a paper that specified three factors that determine the intensity of a person’s curiosity.

For example, it was only because of my deep interest in and knowledge of British comics (importance) that, when I came across some examples of Princess Tina I’d previously not seen (salience), I noticed certain details that contradicted what I thought to be true (surprise). As a result, I was consumed with curiosity to resolve the discrepancy.

The problem with clickbait is that it fakes or overstates the salience, importance, and/or surprise to create an information gap that is either an illusion or not worth filling.

So how do you ensure your content provides a satisfactory filling for your audience’s curiosity gaps?

The problem with clickbait is that it creates an information gap that’s not worth filling. @Kimota explains what to do instead via @CMIContent. Click To Tweet

One educational technique used in schools to boost salience – and curiosity – among students is a Know – Want to Know – Learned chart (KWL).

Before starting a new unit of study or book, for example, a class would brainstorm what they already know about the topic and list it in the Know column of the chart. Then they write what they want to know in the second column – identifying and highlighting their information gaps and fuelling their curiosity. After completing the book or activity, the students write what they learned in the third column.

What’s great about this approach is that it treats curiosity as a product of prior knowledge.

In contrast, many brands seem to plan content in reverse: Start with whatever information is easiest to research and tell the audience they need to know it.

This approach assumes the audience isn’t already better informed. It’s more concerned with easy content than with what information the target persona is burning with curiosity to find out.

Content marketers don’t get to whiteboard a KWL chart with the audience before each piece of content. However, a similar approach could be useful internally when planning content to induce greater curiosity and retention.

Know: What does the target persona already know – or believe to be true? This also ensures the content matches their skill level and depth of interest. You might assume they’ve already read the articles that come up for relevant keyword searches.

Want to know: What information gaps might they have that your content can satisfy? If the persona isn’t aware of the gap – perhaps because new research challenges previous assumptions – how can you create salience by framing the content in relation to their prior knowledge?

Learned: Does the final content satisfy the highlighted information gaps? Are the answers as fascinating, relevant, or useful as the questions implied? No capsicums allowed.

HANDPICKED RELATED CONTENT: 4 Ways to Shift Your Thinking to Truly Focus on Your Audience

If your content is unequivocal and absolute, if it refuses to acknowledge the information gap exists, it risks curtailing the reader’s curiosity.

Unfortunately, content marketing’s obsession with thought leadership means a lot of content does frame itself as complete or definitive, under the misapprehension that any hint of doubt might undermine its authority.

If curiosity is created and fuelled by information gaps, then it makes sense for your content to be at least a little open-ended to give the reader’s curiosity somewhere to go.

Be willing to admit what isn’t known as well as what is. Be open about what’s opinion or theory and what’s a provable fact. Be honest about whether there are other viewpoints or interpretations.

Celebrate information gaps, don’t hide them. Instead, use them as springboards for further research, further content, further links for readers to follow.

And that means the people who write and produce your content need to be just as curious about the topic as the audience is.

Otherwise, you risk running out of answers before your audience runs out of questions.

HANDPICKED RELATED CONTENT: A Swing and a Hit: 5 Storytelling Ideas to Steal From Sports Writers
Get more advice for content leaders in the Chief Content Officer digital magazine. Subscribe today to get it in your inbox every quarter.