Amidst fears of a third Covid-19 wave, Heath Minister Balbir Singh Sidhu today said the vaccination drive in the state needed more push as only 5.35 per cent population had got both doses of vaccine so far. He said based on the latest sero survey report, Punjab seemed to have more cases than reported. 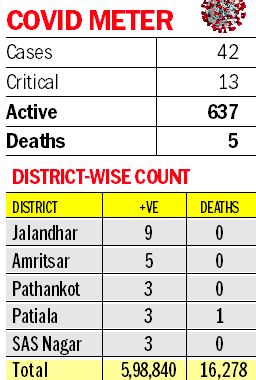 Giving details in a press statement, Sidhu said Punjab had been able to vaccinate 94,79,351 persons, of whom 77,16,433 had received the first dose, while 17,62,918 had completed their vaccination with two doses.

Sidhu further said the survey results pointed to the presence of Covid antibodies in the population surveyed, suggesting Punjab had much higher number of cases than the number reported.

The figure of vaccination was low because Punjab received less supply of vaccine, he said, urging the central government to augment the vaccine supply so that the state could safeguard its population by vaccinating them with both doses. He said presently the figure of people with both doses of vaccine in Punjab stood at 5.35 per cent.

“Therefore, to avoid the third wave apart and prevent pressure on the health infrastructure, vaccine supply needs to be ramped up by the Centre so that entire population can be covered,” he said.

He, however, said the health department was equipped with handling an increased number of cases, which might be higher than the infections in the second wave. “Enough health infrastructure such as enhanced bed capacity, 9,000 oxygen concentrators, 75 PSA oxygen generation plants have been added in a short span,” he said.

Case count may be higher: Minister

Health Minister Balbir Singh Sidhu said the sero survey results pointed to the presence of Covid antibodies among 63.15% population surveyed, suggesting Punjab had much higher number of cases than the number reported