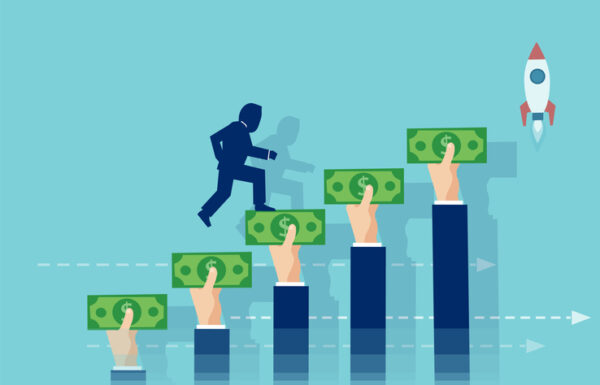 Global investment in telehealth has grown 169% year-over-year to reach a new high of $5 billion in the second quarter of 2021, according to a new report by CB Insights.

Funding for telehealth jumped 17% over the first quarter of 2021, during which time there were 154 deals representing $4.3 billion in investment, the report shows. The second quarter saw 163 deals, with the top five alone representing $1.6 billion in funding — about 30% of the total amount raised. These include weight loss app noom raising $540 million and online pharmacy startup Capsule nabbing $300 million. [Click image to enlarge] 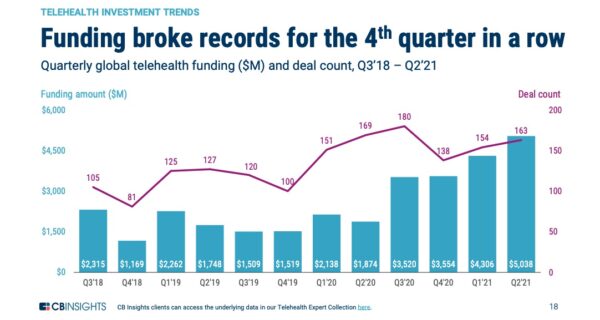 During the second quarter, six telehealth companies joined the unicorn club: noom, KRY, Cerebral, LetsGetChecked, Thirty Madison and Capsule. There are now 27 telehealth unicorns across the globe, valued in aggregate at $55 billion.

The teletherapy, coaching and care management segment appears to be the most popular for investment, encompassing 37% of the total deal share in Q2 2021. The remote monitoring and diagnostics segment was the next most popular with 20%, and the telemedicine providers, platforms and marketplaces segment followed close behind with 19%.

The latter segment — telemedicine providers, platforms and marketplaces — saw funding fall significantly from $1.8 billion in Q1 to $1 billion in Q2 of this year. The teletherapy, coaching and care management segment, on the other hand, experienced the opposite in the same time period, with funding climbing from about $1 billion to $1.8 billion.

In terms of telehealth investors, five stood out. General Catalyst, Optum Ventures, Oak HC/FT Partners, Khosla Ventures and Founders Fund emerged as the most active venture capital investors in the space, according to the report.

It was mergers and acquisition activity that drove venture capital firm exits in the telehealth arena in Q2 as opposed to initial public offerings or deals with special purpose acquisition companies.

There were 35 mergers and acquisitions in total this quarter, including Walmart’s purchase of MeMD and Bright Health buying Zipnosis. [Click image to enlarge] 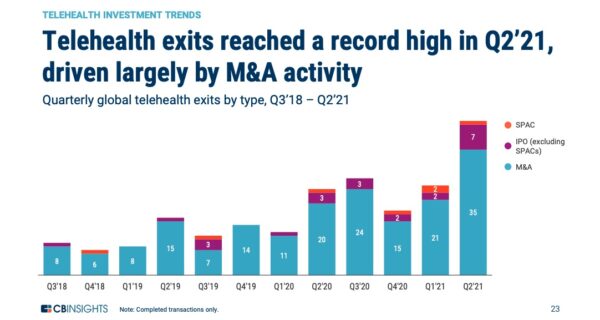 The report was created with data from CB Insights’ emerging technology insights platform. For more details on the methodology, download the report here.