Spotify is experimenting with a new ad-supported subscription tier that gives listeners more freedom over what they listen to compared to the existing free ad-based plan. 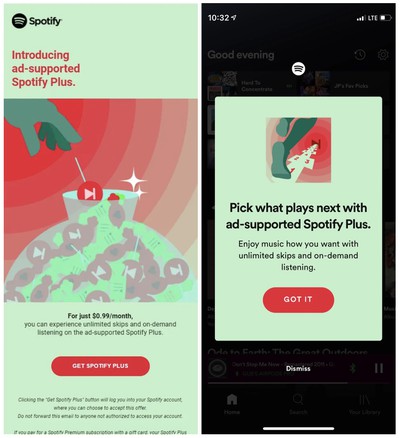 Called Spotify Plus, the tier costs $0.99 per month and lets users pick which songs they want to stream between ads, with unlimited skips and on-demand listening.

That’s in contrast to Spotify’s free ad-based tier, which limits users to skipping no more than six tracks every hour, and only lets them listen to tracks from 15 pre-selected playlists. If they don’t want to listen to the playlists, they’re limited to shuffling between tracks.

The streaming service confirmed to The Verge that it was piloting Spotify Plus with a limited number of users, but cautioned there was no guarantee that it would get a full rollout and that it “routinely conduct[s] tests to inform our decisions.”

Spotify in February announced plans to introduce a new “HiFi premium” tier later this year, but despite some indications that it’s been in testing, we’ve still to see the high-definition plan go live. Since then, Apple Music has launched Spatial Audio with Dolby Atmos and ‌‌Apple Music‌‌ Lossless, two features that became available to subscribers in June for no additional fee.