New Delhi: The Lara Dutta and Akshay Kumar starrer BellBottom has come under the scanner after an Instagram digital creator accused the makers of plagiarising the idea for the Marjaawaan song poster from a Belgian influencer.

Since Camille, the influencer had posted the picture in 2019, netizens felt makers of BellBottom have lifted the idea from her. In the poster that is under scrutiny, Lara and Akshay can be seen leaning from a train with the actress’ leg on top of Akshay.

The digital creator Diet Sabya found similarities between this poster and a similar picture of the influencer leaning out of a train with her lover. Netizens also agreed with her comparison. She wrote in the caption, “Matlab tacky bana do sab kuch #dietsabya #gandicopy #bellbottom”.

Check out the Influencer’s post that was clicked in Sri Lanka in 2019:

While one user commented, “Genuine question, what are the possible copyright issues here? I’m baffled at how much plagiarism gets away with like sab baap ka hai”, another said, “I’ve been on such shoots, heck I’ve done a few. All that’s shown to us are stacks of references of western movie posters. In some cases to be matched inch to inch.”

Take a look at their comments: 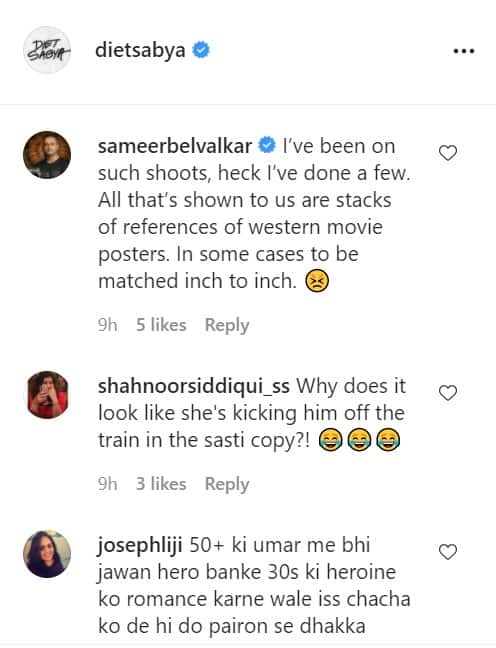 BellBottom is set in 1984, the year that saw Operation Bluestar as well as Mrs Gandhi’s assassination.

“The film is about a hijack that took place during Mrs Gandhi’s tenure,” IANS quoted the actress said, describing the outline of the plot.

BellBottom stars Akshay Kumar in the lead role. It is slated for a big-screen release on August 19 and will regale audiences in a 2D and 3D format.