Southampton weather report on Reserve Day: With weather playing a spoilsport in the ongoing World Test Championship finals between India and New Zealand in Southampton chances of a result look slim.

However, with the Test Championship title being at stake one can also not rule out the possiblity of both the teams still vying for a win, instead of sharing the honours.

India currently are playing 64/2, with Chetshwar Pujara and Virat Kohli present in the middle, and have a slender lead of 32 runs. Today is the final day of the contest, which also is the Reserve day, a step taken by the ICC to compensate for loss of play loss due to rain.

What does the Southampton weather predict on Reserve Day?

The predictions for Wednesday looks like a blessing for cricket fans as there are very less chance of showers hampering the proceedings. However, the conditions will still remain overcast, which would again ring bells in the mind of the pacers of both the sides, who have dictated the contest right from the start. 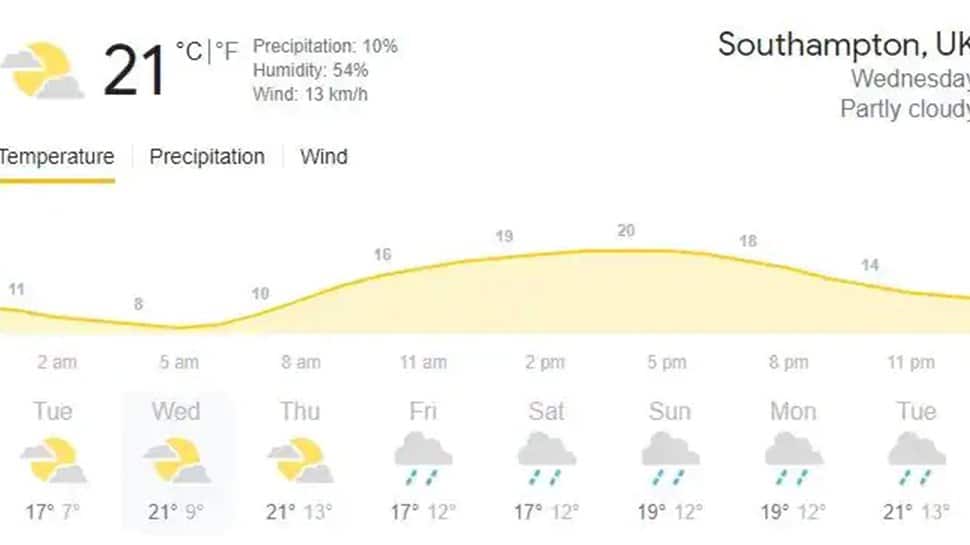 Meanwhile, Mohammed Shami, who made sure India remained in the contest and produced a deadly spell, which saw the Kiwi batsmen bow in front of him said: “Whenever I have been entrusted with responsibility, I have put in my wholehearted effort. Whatever be the situation, I know what the captain wants and then I follow his instructions. I have always been an attacking bowler who goes for wickets.”

The seamer missed out from completing a well-deserved five-wicket haul but asserted he has no regrets.

“When you play for India, you have no such regrets. You can’t think about personal milestones.”