After months of research and development, Pratik Naik and the team at Infinite Tools have released an update to the Infinite Retouch Panel that supports Apple Silicon M1 versions of Adobe Photoshop.

This action and extension panel may not be the first to be released for the M1 system, but according to the company, it is the first one for retouchers made by people who know retouching.

“At the heart of it, you can select a group of layers and simply save them to use every time you hit ‘Create,’” Naik says. “For retouching, we have a range of dodge and burn, frequency separation methods, and help layers — to name a few — to help you during each step of the process. Not to mention all of our helper layers to expedite the process further.”

Naik also says that the user section allows for further customization and the ability to save more layer sets.

“And that’s just the start of the options,” he continues. “The vision was to have a clean and beautiful panel that fits perfectly within Photoshop. It should work no matter what type of work you’re doing and what methods you use to retouch. It truly fits perfectly within any workflow in the most elegant package we could create.” 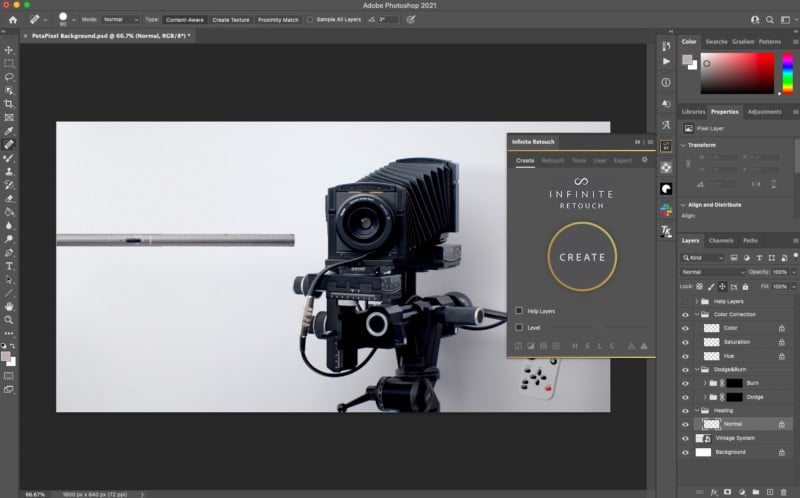 The updated Infinite Retouch includes many bug fixes and updates to performance on top of the new support for Apple M1 devices. Some of these improvements include the ability to customize a tool and tool presets after a button is pressed, such as what method of frequency separation is desired and what layer is selected after it is run, and what tool Photoshop selects once it is finished.

It also adds the ability to create “user layers” which give users the ability to set up their own workflow instead of using the system default which includes user-created actions as well as the addition of 11 “help” layers that Naik and his team say are among the most used by the retouching industry professionals. All of the updates are supported in multiple languages including English, Spanish, German, and French with more being worked on for future updates.

Thanks to the M1 chipset, the new versions of these tools and panels promise to be much faster on Apple’s latest devices. While editors will still have to manually complete retouching tasks, the layers and tools created in the actions are reportedly near-instantaneous when clicked. If so, this update alone is reason enough for retouchers who have to work on so many files that every single second counts when approaching a deadline.

The panel updates add improvements for faster exporting, improved image sharpening, and customizable grain tools. The M1 version of Infinite Retouch also adds the company’s own “Holy Grain” to the mix, which is a collection of high-resolution film scans with various grains. For each film type, users can adjust the slider to decide on the grain size, amount, and individual lens artifacts or flaws to include for the most realistic look possible. You can read the full documentation of the available tools within the panel here

The Infinite Retouch Panel retails for $129 but was currently discounted by 25% at the time of publication. A “limited” free trial is also available for those who want to try the Panel before buying.