India GDP Growth Rate: India’s economy grew by 1.6 per cent in the fourth quarter of 2020-21, restricting the full-year contraction to 7.3 per cent, official data showed on Monday. Here are all the key details:-

-The fourth quarter growth was better than the 0.5 per cent expansion in the previous October-December quarter of 2020-21.

-The gross domestic product (GDP) had expanded by 3 per cent in the corresponding January-March period of 2019-20, according to data released by the National Statistical Office (NSO). 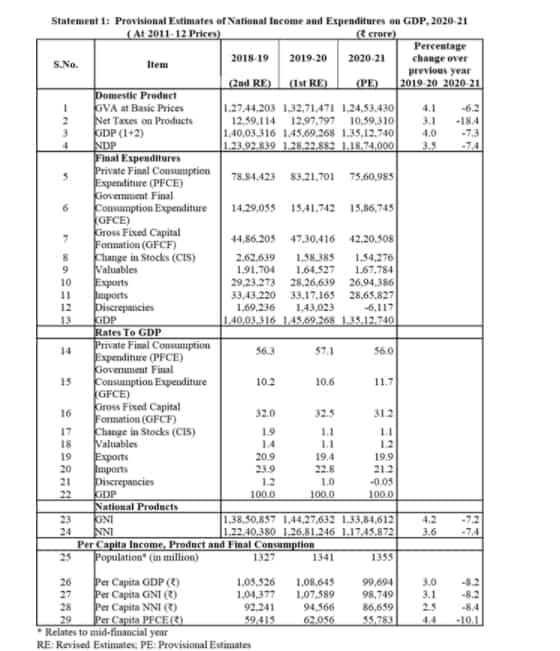 -The NSO had projected a GDP contraction of 7.7 per cent in 2020-21 in its first advance estimates of national accounts released in January this year.

– The NSO, in its second revised estimates, had projected a contraction of 8 per cent for 2020-21.

– The National Statistical Office (NSO), Ministry of Statistics and Programme Implementation, has released the Provisional Estimates of National Income for the financial year 2020-21, both at Constant (2011-12) and Current Prices. These are presented in Statements 1 to 4.

-Quarterly Estimates of Gross Domestic Product (GDP) for the fourth quarter Q4 (January-March) of 2020-21, both at Constant (2011-12) and Current Prices along with the corresponding quarterly estimates of expenditure components of GDP are also released. These are presented in Statements 5 to

– Estimates including growth rates of Q1, Q2 and Q3 of 2020-21 released earlier have been revised in accordance with the revision policy of National Accounts.

-The Second Advance Estimates (SAE) of National Income for the year 2020-21 were released on 26th February, 2021. These estimates have now been revised incorporating latest information on (i) Index of Industrial Production (IIP), (ii) Third Advance Estimates of Crop Production, (iii) Production of Livestock products and Fisheries, (iv) Accounts of Central & State Governments, (v) GST data on Taxes and Supplies, details of other taxes. Besides information on indicators like Deposits & Credits, Passenger and Freight Traffic of Railways, Passengers and Cargo Handled by Civil Aviation, Cargo Handled at Major Sea Ports, Sales of Commercial Vehicles etc., available for first 9/10 months of the financial year at the time of SAE, have been revised with updated data (upto March 2021).

-Early results on the performance of Corporate Sector for April-December 2020, which were used in SAE, have been revised using the latest available information. Considering the current Covid situation, the statutory timelines for filing the requisite financial returns of fourth quarter have been extended by the Government. Consequently, the private corporate sector estimates of industries are based on other indicators like IIP, GST etc. This may have implications on subsequent revision of these estimates.

-Improved performance of indicators, used in compilation of GVA, in the fourth quarter of 2020-21, owing to calibrated and steady opening of the economy, is reflected in the improved growth estimated now for the year 2020-21 as compared to the previous projection in SAE. In addition to this, revised data received from some source agencies for the previous quarters and receipt of GST data for third quarter along with fourth quarter have also contributed to the revision in the estimates.

-Public Administration, Defence & Other Services category includes the Other Services sector i.e. Education, Health, Recreation, and other personal serviceswhich have a greater share in the overall category. Owing to their contact intensive nature, these services had to bear the maximum brunt of the lockdown induced by the prevailing pandemic. With the gradual opening of the economy, the performance of these services has improved over the quarters.

– GDP is derived as the sum of the gross value added (GVA) at basic prices, plus all taxes on products, less all subsidies on products. The total tax revenue used for GDP compilation includes Non-GST Revenue and GST Revenue. The Revised Estimates of Tax Revenue for 2020-21 as available in the Annual Financial Statement of the Central Government for 2021-22, and latest information on the website of Controller General of Accounts (CGA) and Comptroller and Auditor General of India (CAG) have been used for estimating taxes on products at Current Prices.  For obtaining Taxes on Products at Constant Prices, volume extrapolation is done using volume growth of taxed goods and services and aggregated to get the total volume of taxes. There was a sharp spike from Rs 2.27 lakh crore in BE 2020-21 to Rs 5.95 lakh crore in the revised Estimates for the major subsidies (especially food subsidies) of Centre, presented in Budget 2021-22, in RE 2020-21. Revised provision of subsidies of Centre has been considered after adjusting for arrears of previous years and repayment/prepayment of loans, as per information received from Ministry of Finance. For subsidy component of States, latest information available on the CAG website has been taken into account.Estimates of Revenue expenditure, Interest payments, Subsidies etc. were projected using the latest available data on the CGA and CAG websites and the information available in the Budget 2020-21 documents of Union and States, while accounting for relative shares of Centre & States, for estimating Government Final Consumption Expenditure (GFCE) and subsidies.

– To meet the crisis caused by the pandemic, the Government has announced numerous policy measures, from providing the most vulnerable with daily food rations to postponing some deadlines for compliance and tax filings. Clarifications provided by International agencies like IMF, EUROSTAT etc. on treatment/economic classification of various measures provided by the Government in the pandemic times were also considered while compiling the estimates. Percentage changes in the main indicators used in estimation are given in the Annexure.

-The measures taken by the Government to contain spread of the Covid-19 pandemic have had an impact on economic activities as well as on data collection mechanisms. The Quarterly estimates of National Accounts are indicator based and data sourced from various Ministries/ Departments/ Private agencies serve as valuable inputs in the compilation of these estimates. There have been disruptions in data flow from some source agencies leading to data coverage issues. The limitations in the datasets and the timeliness have a bearing on the GDP estimates and its subsequent revisions. To address the data challenges arising out of the unprecedented situation, the National Statistical Office has explored alternate data sources, indicators and methodology along with clarifications from International agencies, to capture the current economic situation, as per accepted best practices. Estimates are, therefore, likely to undergo sharp revisions in due course, as per the release calendar. Users should take this into consideration when interpreting the figures.

– Estimates of Gross/Net National Income and Per Capita Income along with GVA at Basic Prices by kind of economic activity, Expenditures on GDP for Provisional Estimates and Fourth Quarter (Q4) 2018-19, 2019-20 and 2020-21 at Constant (2011-12) and Current Prices, along with percent changes and applicable rates, are given in Statements 1 to 8.