New Delhi: Ace music composer, singer Vishal Dadlani will be celebrating his 48th birthday on Monday (June 28). It’s a little known fact but the singer began his musical journey as part of a electronica/indie-rock band Pentagram in 1994. He then branched out to Bollywood and worked for films such as ‘Jhankaar Beats’, ‘Bluff Master’, and ‘Salaam Namaste’. Thanks to Dadlani, movies such as ‘Om Shanti Om’, ‘Bachna Ae Haseeno’, ‘Dostana’, ‘Anjaana Anjaani’, ‘Bang Bang!’ have got catchy, soulful tracks that the audiences still groove to.

Apart from his mindblowing musical numbers, Vishal has also made headlines for his strong statements that have led him into controversy. Since he always speaks his mind and is unafraid to voice out his opinion, he often has head-on conflicts with people online.

On the occasion of his birthday, let’s take a look at times when his strong statements landed him in hot water: 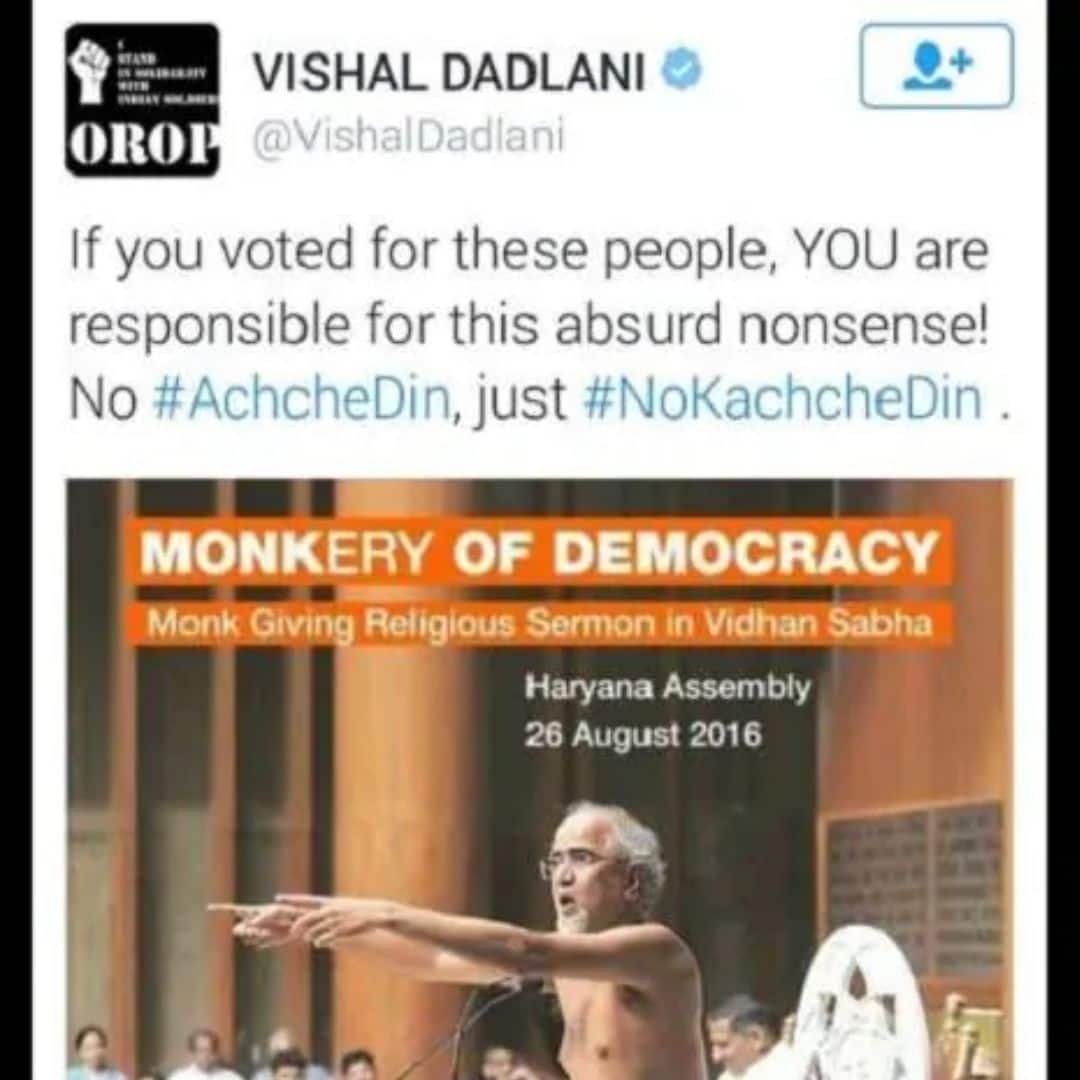 1. In 2016, Vishal Dadlani was criticised for netizens for making derogatory remarks against a digambara monk Muni Tarun Sagar on Twitter. The monk was seen speaking at a Haryana Assemby at the invitation of Ram Bilas Sharma. He was completely naked during the address as he had renounced clothes as part of his relegious journey. Commenting on this, Dadlani had sarcastically tweeted, “If you voted for these people, YOU are responsible for this absurd nonsense! No #AchcheDin, just #NoKachcheDin.”

This tweet received a lot of backlash from the Jain community and singer was accused of hurting relgious sentiments. FIRs were filed against Dadlani and later, he was heavily fined by the Punjab and Haryana High Court.

2. During the release of Shah Rukh Khan-starrer ‘Chennai Express’, Vishal had outrightly declared that rapper Honey Singh wasn’t a huge part of the music production for the film. He tweeted, “It’s hilarious and pathetic, how desperately this tacky rape-rapper is trying to ride on the fame of @iamsrk and #ChennaiExpress. Poor guy.”

It’s hilarious and pathetic, how desperately this tacky rape-rapper is trying to ride on the fame of @iamsrk and #ChennaiExpress. Poor guy.

3. In 2019, when Justice Ranjan Gogoi retired as the chief justice of India, Vishal Dadlani took to Twitter to celebrate his leave and wrote, “Goodbye, ex-CJI Gogoi, and I hope you can stomach the disgraceful and cowardly legacy you have left this august Office.” He also shared a link to a blog that had descriptions of Gogoi’s alleged misdoings and his work. For this, he received a lot of backlash from netizens.

Goodbye, ex-CJI Gogoi, and I hope you can stomach the disgraceful and cowardly legacy you have left this august Office.

4. Last year, the singer was trolled by netizens when he commented on PM Modi‘s appeal to people to stand at their windows, doorways and balconies to applaud for frontline workers such as doctors, nurses, policemen and airport staff. After the Prime Minister made this announcement, the singer tweeted, “What percentage of Indians have balconies?” taking a dig at the announcement.

What percentage of Indians have balconies?

Despite these controversies, Vishal seems to be unshaken and strong in his worldviews as he still speaks his mind fearlessly.

Returning to his musical legacy, in 1999, Vishal Dadlani and Shekhar Ravjiani formed a duo and went on to compose hundreds of Bollywood songs. They have also won the Filmfare RD Burman Award for New Music Talent for their work in the film ‘Jhankaar Beats’.