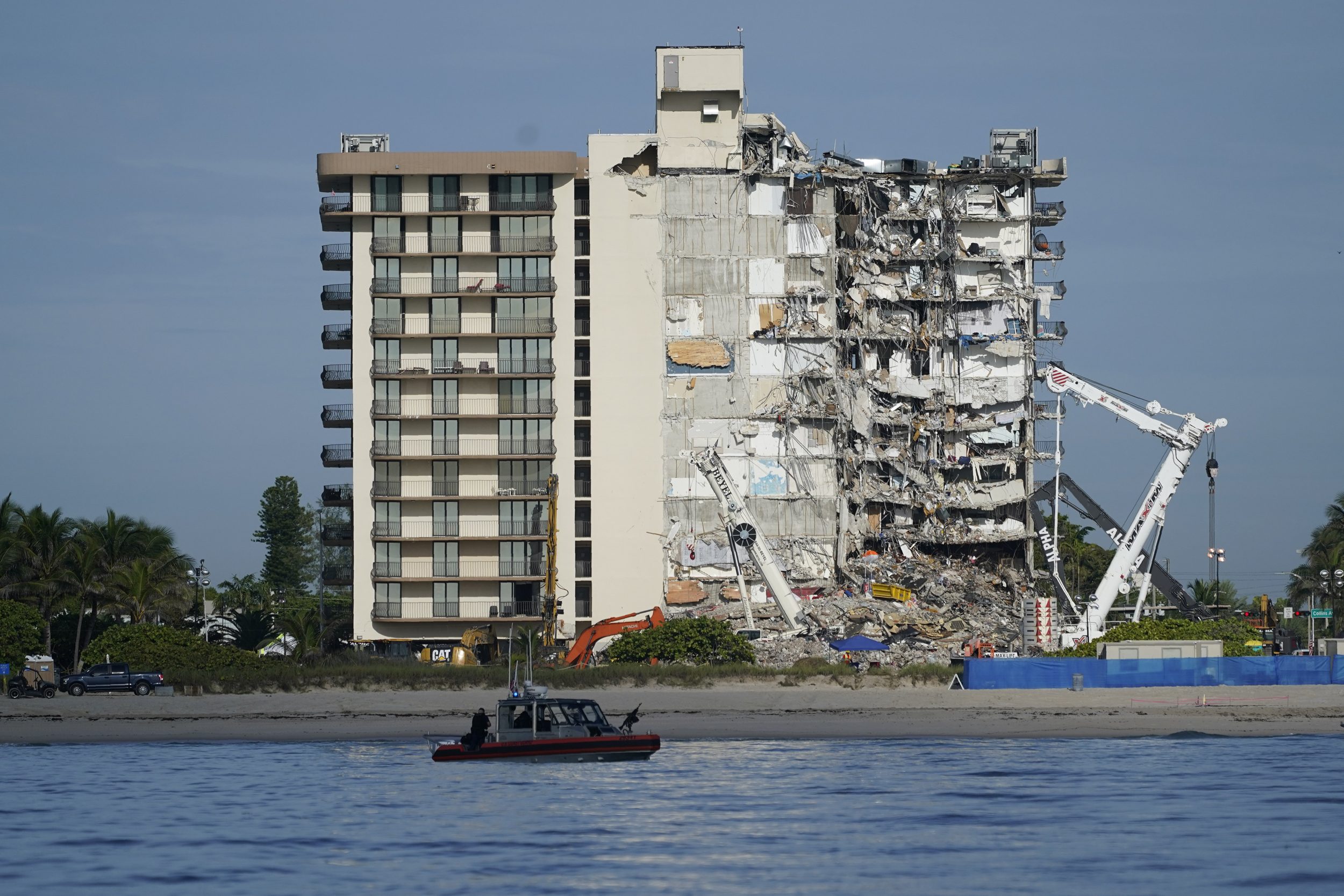 A week after the partial collapse of a Miami Beach-area condo building, search and rescue crews paused their work early Thursday over fears that the other half of the building might come down.

Miami-Dade County Mayor Daniella Levine Cava said operations were halted over “concerns about the standing structure.” She said the families of those missing were informed, and the “search and rescue operation will continue as soon as it is safe to do so.”

Fire Chief Alan R. Cominsky said “slight movement in the concrete floor slabs near north and south corner of the building that could cause additional failure of the building moving in the debris pile” forced the temporary stop at 2:11 a.m.

South Florida could also be hit with Tropical Storm Elsa, which was churning in the Atlantic Ocean Thursday and could interfere with search efforts. Crews have grappled with bad weather since work began on the site shortly after the collapse around 1:30 a.m. June 24.

But Gov. Ron DeSantis said Wednesday that some of resources working round the clock at Champlain Towers South in Surfside may have to be diverted if storms hit Florida. “Tis the season and you’ve got to be ready,” he said.

Thursday also marks a week since a survivor has been discovered.

On Wednesday, the bodies of two children, ages 10 and 4, were found at the site, bringing the death toll to 18.

“Any loss of life, especially given the unexpected, unprecedented nature of this event, is a tragedy,” Levine Cava said. “But the loss of our children is too great to bear.”

The number of unaccounted for people stands at 145.

President Joe Biden and first lady Jill Biden will travel to Surfside Thursday to meet with first responders and family members of those still missing.

Biden will receive a briefing from Levine Cava, DeSantis — a Republican and ally of former President Donald Trump — as well as first responders and other local leaders.

The president will also thank search and rescue teams and will meet with families who have lost or are still missing loved ones. He will give remarks at 3:50 p.m. before returning to Washington.

The White House has said that Biden did not immediately visit the site out of concern that a presidential visit would disrupt rescue efforts.

Levine Cava said Thursday morning that the president’s visit would have “no impact on what happens on this site.”

The National Institute of Standards and Technology, which investigated in the aftermath of Sept. 11, 2001, announced Wednesday that “it would launch a full technical investigation” into the collapse.

A team has been at the site for days and determined that the collapse met the criteria for an in-depth federal investigation.

“There are millions of high-rise condominium units in Florida alone, many of them near the ocean or aging,” the NIST said in a statement. “While a NIST investigation is intended to identify the cause of the Champlain Towers South collapse, it could also uncover potential issues for other similar buildings nearby and throughout the nation.”

The agency’s investigation does not have a set timeline and is expected to take years to complete.

Miami’s top prosecutor said Tuesday she will ask a grand jury to investigate the collapse in hopes to get answers sooner.

Miami-Dade State Attorney Katherine Fernandez Rundle said she “will not do anything to jeopardize” the NIST investigation.

“It is painstaking and complicated work,” Rundle said. “However, this is a matter of extreme public importance, and as the state attorney elected to keep this community safe, I will not wait.”