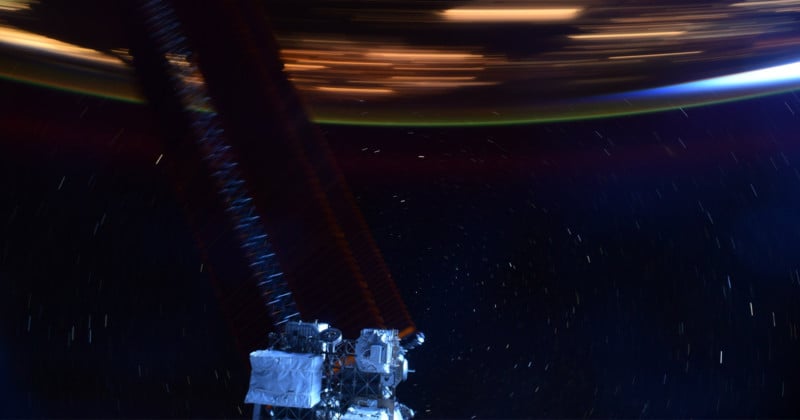 While most know the International Space Station moves extremely fast, giving a solid idea of what that really means is not easy to convey. To help, French astronaut Thomas Pesquet has captured and shared an image that shows what it feels like to be traveling at about 17,400 miles per hour.

Testing a method he has been experimenting with, Pesquet uses a 30-second exposure while focusing on the space station with the night sky of planet earth streaking by in the background.

The ISS orbits the Earth from about 250 miles (400 kilometers) above the planet and takes about 90 minutes to complete a full orbit. This means the station and its inhabitants circle the planet about 16 times every day. Despite this incredible speed, the astronauts on the space station have said they don’t experience anything unusual while living and working there. From the surface though, it is quite a different perspective. As noted by Digital Trends, NASA has set up a notification system that will notify interested parties to when the International Space Station is traveling over their neighborhood, allowing them to spot the ISS with their own eyes as it streaks rapidly across the sky on a clear night or early morning.

European Space Agency astronaut Thomas Pesquet has been capturing and sharing a lot of images of Earth and other astronomical photos since arriving at the International Space Station, but this latest image is the first in a new series Pesquet is currently focusing his efforts. The photo project involves capturing images that attempt to display the incredibly high-speeds that the space station orbits the Earth.

Pesquet has actually shared a few unique perspectives of Earth since he has been a resident of the ISS. In late May, he published a set of photos that depicted Earth with a stronger perspective on its actual makeup, with the focus on water. The photos were unusual since it is rare to see perspectives of the planet that don’t include some kind of landmass. Pesquet’s showed only the blue vastness of the oceans.

NASA’s YouTube channel is an excellent place to keep tabs on the projects of ISS astronaut as well as what life is like on the space station.