The Chennai bench of the National Company Law Tribunal (NCLT) has grilled IDBI Bank again over one-time settlement (OTS) deal reached between the IDBI Bank-led bank consortium and Siva Industries and Holdings Ltd (SIHL). The bench today questioned the alacrity being shown by the lead lender IDBI Bank as CBI has charged C Sivsasankaran in a loan fraud case of IDBI Bank.

The bench also asked the bank consortium in what capacity did the proposer give the settlement plan and the “real intent” behind the one-time settlement offer. The tribunal also sought explanation if the proposal could be admitted under the law.

The NCLT bench further asked if the proposer of the plan was going to “gift” the company to the original promoter.

Proposer of the settlement plan RCK Vallal is a shareholder and father of Siva Industries promoter C Sivasankaran.

The bench further asked the bank consortium if this one-time settlement was not a resolution in disguise and a “backdoor entry for the promoter”.

It asked if Section 29A of IBC can be triggered in the case.

The bench then went on to ask what happens if the proposer of settlement defaults?

While hearing the matter, it observed that the concern was not just of what the banks would get from the OTS plan but also what banks were losing as a result of this settlement plan.

The bench also questioned the neutrality of Resolution Professional (RP).

The bench also asked if any resolution plan was received and if not accepted then the reason for not accepting the plan.

The bench also asked what the banks would do in the absence of a settlement plan.

NCLT Chennai bench heard all the parties in the case and reserved its order. The case was heard by Member Judicial R Shucharitha and Member technical B Anil Kumar.

He also assured the bench that if the settlement clause is broken then banks have sufficient remedies to act accordingly. The proposer also informed the bank that LIC, SBI, Union Bank and Central Bank are secured lenders in the case.

While defending the settlement plan, the lead lender IDBI Bank said that ongoing CBI cases will continue and a consent of the CBI has been taken for the current settlement plan.

The bank in its submissions before the NCLT said that under the settlement proposal the lenders were getting a sum of Rs 323 Cr as against the liquidation value of Rs 229 Cr.

IDBI Bank told the bench that Rs 37 Cr settlement amount was for only two loan accounts with a total exposure of Rs 111 Cr. The bank through its counsel said that the remaining loan of Rs 492 cr of Axcel Sunshine will remain as a separate account and that there was a letter of comfort for the said loan.

The total exposure of the lenders in the case is Rs 4863 Cr.

IDBI Bank also said that a wrong impression was being created about the bank over the one-time settlement plan.

The RP for the Siva Industries defended the proposed settlement by saying that plan has been approved by more than 93 per cent of the lenders. He further said that no sound resolution plan for the company was received barring one from Royale Investment.

He said that the plan proposed by Royale Investment was below the liquidation value and hence was rejected by the lenders. The RP also assured that sufficient safeguard was provided under the IBC to prevent misuse of the mechanism of withdrawal of application. One such safeguard is a mandatory 90 per cent voting for such withdrawals against the 66 per cent for normal approvals.

RP argued that there are various stakeholders besides the lenders like employees and their interests also mattered, and if the company went into liquidation, they may also get affected.

The RP also submitted that he was just doing his job on NCLT’s remarks on whether he was siding with the promoters.

The RP informed the tribunal that there were 50 employees in the company and company is a going concern and deals in business of agri-processing, software and real estate.

SBI has filed against the proposed settlement saying that it has secured assets of more than what is being offered to the bank. It questioned the forced settlement being proposed in this case. SBI has mortgaged assets worth more than Rs 32 cr against the offered amount of Rs 25 cr under the settlement.

SBI also submitted to the court that the corporate debtor was declared as wilful defaulter by the bank.

On June 18, while hearing the matter the bench had posed tough questions to the lenders for settlement of Rs 4883 cr of dues for only 323 cr.

Vallal has offered to settle the dues of 4863 cr for Rs 323 cr where the upfront amount is just 5 Cr and lenders will get rest of the dues in 180 days post NCLT approval.

Questions were raised against the withdrawal application and settlement plan, as settlement amount proposed is meagre 6.5 per cent of the dues. Heavy haircuts have been proposed in the plan and it is being seen as going against the intent of Insolvency and Bankruptcy Code.

IDBI Bank – which is the leading bank in consortium – is facing a backlash because of the proposed settlement plan. The exercise is not being seen as ethical.

Though the proposed settlement plan is not public, as per sources the earlier plan had huge haircuts for banks with Rs 5 Cr proposed to be paid upfront and the remaining amount within 180 days. 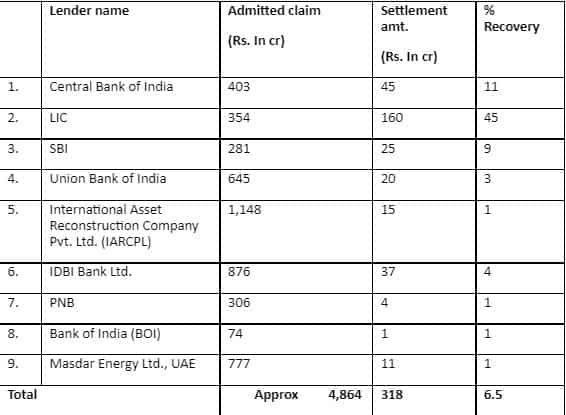 There is resentment among the sections of society on the lower recovery rates under IBC and such settlement plans. Recently the well known industrialist Harsh Goenka echoed this mood. On the micro blogging site Twitter he wrote ”Promoters stash away money on the side, take the company to the cleaners, get a 80-90% haircut from bankers/NCLT – that’s the new game in town. A lot of institutions cleansed by the government – NCLT next please @PMOIndia. We can’t have our hard earned public money being stolen!

Promoters stash away money on the side, take the company to the cleaners, get a 80-90% haircut from bankers/NCLT – that’s the new game in town. A lot of institutions cleansed by the government – NCLT next please @PMOIndia. We can’t have our hard earned public money being stolen!

Experts are of the view that IBC was brought with a good intention to deal with defaulting promoters and find a resolution in a time-bound manner. However, the recent trends seem to be discouraging. Many have argued that the cases were neither being resolved as per the timelines nor were the recoveries from the resolution significant. Banks have taken huge haircuts in many big cases initially referred to NCLT. So, some tweaks may be required to make it really effective. Some of the areas of concern are working structure of CoC, lack of transparency in the process and allegation of collusion of RPs with promoters.