New Delhi: A day after celebrating her historical win at Miss Universe 1994 pageant, Sushmita Sen shared the ‘special’ text message her father sent her on the special day.

Sushmita, who is the first Miss Universe winner from India, celebrated her 27 glorious years of the crowning ceremony on Friday.

The mother-of-two might have received heartfelt messages from all over the globe who congratulated her for bringing the first-ever Miss Universe crown to India, it was her father’s thoughtful message which she termed as ‘special’ on her Instagram handle.

“Wishing you a special day for our life… Today is the 21st day, 21st week and 21st year of the 21st century,” read the message which was sent to Sushmita by her father. 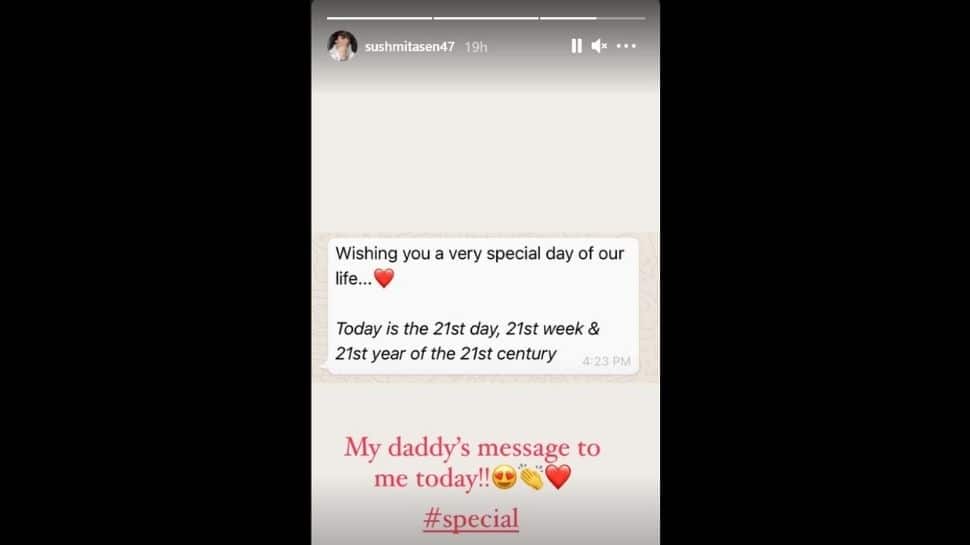 The ‘Main Hoon Na’ star shares a special bond with her father Shubeer Sen, who served the country as an Indian Air Force Officer for many years. In many of her interviews, Sushmita has often shared anecdotes of how her father pulled out all the stops to support her for the Miss Universe pageant.

In a recent Instagram live session where the 45-year-old actor revealed that she was conferred with the prestigious National award titled ‘Champions Of Change Award’ for her contribution towards women empowerment and social welfare; she also shared that her army-retired father would be proud of her for the win because “when Bharat gives his daughter something, he just gets super happy.”

Meanwhile, on the work front, Sushmita made her comeback in the acting career with the Indian crime drama web series ‘Aarya’ for which she had bagged the title ‘Best Actor in drama series’ at eminent award shows like Filmfare, Dada Saheb Phalke, Film Critics Guild, Raj Kapoor Award.

Currently, she is shooting for Season 2 of the series. Directed by Ram Madhvani, Sandeep Modi, and Vinod Rawat, ‘Aarya’ is an official Indian remake of a popular Dutch show ‘Penoza’.